‘American Veteran’ Honors the Many Faces of the U.S. Soldier

It was 1979, and Greg Cope White was a scared, skinny kid who thought it might be fun to join the Marines. When he went to enlist with his best friend, he learned he would have to answer a few questions.

Was he a homosexual?

Had he ever had any homosexual thoughts?

“I’m being asked by a stud, a guy with bulging biceps, wearing pants that are practically painted on,” Cope White recalled in a phone interview from his Los Angeles home, laughing. “And I’m looking at him like, ‘Dude, I’m having homosexual thoughts right now.’ But I locked it up. And I somehow slipped under the radar.”

Cope White is among the almost 50 military veterans interviewed in “American Veteran,” a four-part documentary series premiering Tuesday on PBS. The series features veterans from every major U.S. conflict going back to World War II and up to the recently concluded Afghanistan War, the longest in U.S. history. It also includes many who served stateside. All told, “American Veteran” seeks to bridge the gap between the estimated 18 million living Americans — or about 7 percent of the adult population — who have served in the military and those who haven’t.

The voices telling these stories are diverse, representing every military branch. They are male and female; Black, white, Asian, Hispanic and Native American; straight and gay. Most are grateful for what the military gave them — even when their experiences left them scarred.

Greg Cope White, center, on the U.S. Marine Base in Twentynine Palms, Calif., in 1981. Closeted at the time, he said he loved serving but felt “burdened by the secret of being gay.”Credit…via PBS

“Veterans and civilians live in two different worlds,” said Judith Vecchione, who executive produced the series with Elizabeth Deane. Vecchione and Deane are married to Vietnam War veterans, which is one reason they were drawn to the project.

“They understand things differently,” Vecchione said. “This divide has become more pronounced in the last 50 years, since the end of the draft, and in the last 20 or so years, with the downsizing of the military.”

Everyone featured in “American Veteran,” a multitiered project that also includes short online films and a podcast, has served, including not only the interview subjects but also the narrators, among them the comedian Drew Carey, a Marine veteran; Senator Tammy Duckworth of Illinois, an Army veteran; the actor J.R. Martinez, an Army veteran; and the actor and Native American activist Wes Studi, a National Guard veteran.

“We didn’t bring in wives and husbands and children,” Vecchione said. “We stayed with the perspective of the veterans and gave them the platform. That was what we thought served our goal of bridging the divide.”

In addition to the talking heads, “American Veteran” features plenty of archival footage of life in the field and back home. We see these veterans now and as they looked when they served. Film clips and Public Service Announcements show how much the world has changed over the years.

The interviewers — the story producer Kathleen Horan, the writer and director Steven Ives and the producer and director Leah Williams — spent as much time as possible getting to know the veterans and gaining their trust. “It took time to convince them that we were going to be good stewards of their story,” Vecchione said. “We did four- and five-hour interviews with most of these veterans. We had a lot to work with.”

In an email, Williams described the space those long hours gave for serendipity: “Sometimes things happen while sitting in the chair that are incredible and wholly unexpected,” she said. “You feel as if you have been given this unbelievable gift, that someone trusted you enough to open up, to be vulnerable.”

For all the ways it celebrates the contributions of veterans, “American Veteran” should not be mistaken for a recruiting ad. One prominent theme in the series speaks to the internal tensions of the veteran experience. We see one veteran after another attest to how serving in the military made them better people: more skilled, mentally and physically stronger, more attuned to people from other cultures.

But many of these same veterans underwent traumatic experiences during their service, from sexual assault and harassment to battlefield combat leading to post-traumatic stress disorder, or P.T.S.D. 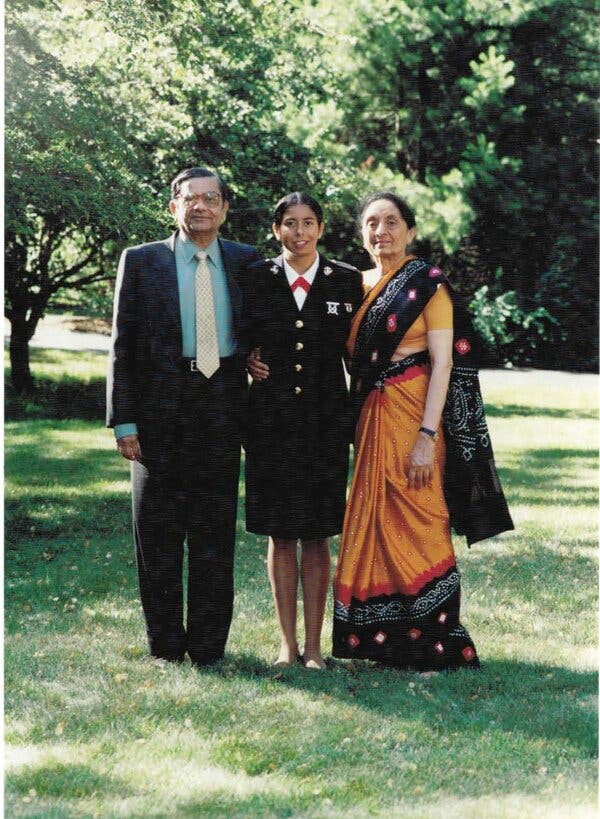 Anuradha Bhagwati, center, with her parents, Jagdish Bhagwati and Padma Desai. She helped overturn the Marines’ ban on women in combat.Credit…via PBS

“I was just completely wowed by my Marines every day,” she said in a phone interview from her San Francisco home. “It’s remarkable, the level of excellence, the level of initiative and of problem solving. I just don’t see that in everyday civilian life. You might see it in sectors of immigrant society where you cannot make a mistake, and you’re working all hours of the day to send money back home.”

The basic attitude, she added, was: “We’re just not going to fail.”

Then there was the darker side. “I saw a lot of sexual harassment, and I saw a lot of sexual assault,” she said. She saw an institution that was not only “clueless about how to grapple with those issues,” she added, but oftentimes “hostile in the face of grievances that were made. When I got out, I was really heartbroken and traumatized.”

So she decided to do something about it. She founded the Service Women’s Action Network (SWAN), which brought national attention to sexual violence in the military and helped overturn the ban on women in combat. She also wrote a memoir, “Unbecoming: A Memoir of Disobedience.” She is proud of the change she has created. But she has no delusions that anything is perfect.

“It’s an extraordinary institution that draws so much talent,” she said of the military, “but often fails the people who join.”

This tension, between pride and regret, between invaluable experience and deep trauma, runs throughout “American Veteran.” With some of the veterans interviewed, it goes back almost 80 years.

Frank DeVita, 96, enlisted in the Coast Guard shortly after the Japanese bombed Pearl Harbor, drawn by the promise of immediate action. During the 1944 D-Day Invasion, he was in charge of lowering the ramp of his Higgins boat onto Omaha Beach, in Normandy. He watched as his friends were slaughtered en masse.

He came home with what was then called battle fatigue, what was previously called shell shock, and what is now known as PTSD. He never even discussed the war with his wife.

“We’re called the Greatest Generation, and some people say we saved the world,” DeVita says in the series. “But when I came home, I didn’t belong there anymore. I was a stranger in my own house. I didn’t know what to do. I missed my shipmates. There was nobody to talk to. There was no psychiatrist or anything like that. It took me a long time to adjust.”

As Shoshana Johnson noted, attitudes around mental health have changed gradually for the better. Johnson, an Army veteran, was a food service specialist ordered to Iraq in 2003. Her first month in-country, her convoy was ambushed and 11 soldiers were killed. Johnson was wounded and captured along with five others, becoming the first Black female prisoner of war in U.S. military history.

Shoshana Johnson, the first Black female American prisoner of war, struggled to readjust after coming home. “They expect you to come home and be normal,” she said. “How do you become normal?”Credit…via PBS

She was rescued after 22 days, went on to attend culinary school on the G.I. Bill and wrote a memoir, “I’m Still Standing.” But before that, she had trouble shaking her Iraq experience. She tried to take her own life. She had three stays in mental hospitals, a form of recourse for which she is grateful. The way she sees it, those who came before her — those who called it shell shock and battle fatigue — made it OK for her to seek help.

“They expect you to come home and be normal,” Johnson said by phone from her home in El Paso. “How do you become normal?”

Indeed, what is “normal” in the military? Cope White had plenty of time to consider the question. As he writes in his memoir, “The Pink Marine,” “I entered boot camp in 1979 — 15 years before ‘Don’t Ask, Don’t Tell’ was put into law — feeling less masculine than everyone else and burdened by the secret of being gay.”

He served six years stateside as a Marine communications specialist, all of them technically “illegal,” he said, in an era in which gay people were barred from serving. And he loved it. (Cope White came out to family and friends in 1981, when he was still in the Marines.)

After leaving the military, Cope White went on to carve out a career, as an openly gay man, in television, writing for series including “Dream On” and “The Powers That Be.” Currently, he is developing “The Pink Marine” into a TV series with the sitcom legend Norman Lear. He says he couldn’t have done any of it without his service.

“When we become civilians again, we carry with us our military experience and the things that we learned, including service to our country, dedication, discipline and camaraderie,” White said. “Had I not experienced those things, I wouldn’t be the person I am today.”

In the end, “American Veteran” is a reminder that there are a near-infinite variety of veterans and veteran experiences, and it helps close the gap between veterans and everyone else. It asks civilians to walk a mile in veteran boots, and it lights a path for the journey.