California Accounts for 12% of U.S. Students, but Only 1% of Covid School Closures 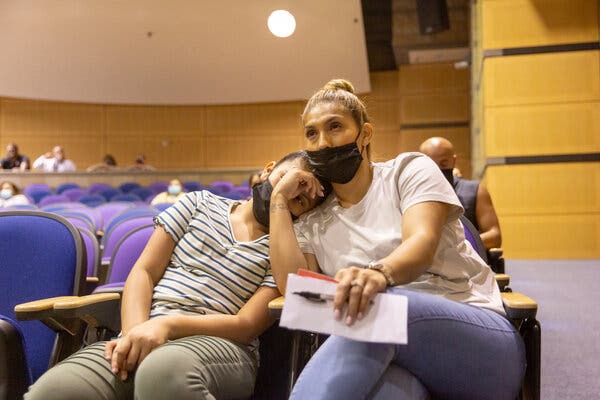 A mother and daughter attended a parent meeting at Arleta Senior High School in Los Angeles.Credit…Allison Zaucha for The New York Times

The signs at scattered rallies across California on Monday were familiar to anyone who has followed the state’s yearslong childhood vaccine wars.

“Our kids are not lab rats.” “My body, my choice.” “Coercion is not consent.”

California has mandated that all schoolchildren must eventually get Covid-19 vaccines, the first and only state to do so. In protest, some parents pulled their children from school on Monday and took to the streets in Bakersfield, Los Angeles, Vacaville, Sacramento and more.

At the heart of this fight is a complicated truth: California’s new student vaccination requirements haven’t yet begun, but the state already has a remarkably low number of outbreaks at schools.

Of the 2,321 nationwide school closures since August because of Covid-19, about 1 percent have been in California — even though the state accounts for 12 percent of the nation’s K-12 students, according to data from Burbio, a technology company that monitors outbreaks.

So some parents may be wondering: If masking, testing and other prevention strategies are working so well, why is the state adding an immunization requirement?

Simply stated, vaccines are the best tool for sparing people from coronavirus infections. You’re probably familiar with these numbers by now, but the Moderna and Pfizer-BioNTech vaccines prevented roughly 95 percent of symptomatic illnesses in clinical trials.

And while experts say California’s classroom safety measures are highly effective, the fall semester has also coincided with a precipitous drop in coronavirus spread statewide. In other words, more protection may be needed if cases begin to climb again.

Linda Darling-Hammond, the president of California’s Board of Education, told me she saw vaccines as the next stage of the state’s pandemic response. Gov. Gavin Newsom has often been criticized for introducing restrictions, such as in July when he mandated universal masking in schools — only for the move to be later endorsed by federal officials.

“The science works, if you are very, very persistent and purposeful about implementing it,” Darling-Hammond told me. “I think there’s a human tendency to say — as soon as things look good — ‘OK, we can take our foot off the gas.’ We can’t.”

Darling-Hammond said the state needed to be prepared for the emergence of more variants. Vaccinating children will not only confer them protection from infection, but also limit virus spread that can lead to new mutations.

Statewide, 71 percent of Californians 12 and over are fully immunized, one of the highest rates in the nation, according to a tracker by The New York Times. The percentage is lower for the youngest age group eligible for vaccines, those between 12 and 17, at around 57 percent.

But there’s a lot of variation across the state, and school outbreaks have typically hit places where coverage is low, Darling-Hammond told me.

Counties where multiple schools have closed this fall include Kern (where 43 percent of people 12 and over are fully vaccinated), Tehama (41 percent) and Lassen (32 percent).

There aren’t uniform guidelines across the state for when a school must shut down in response to an outbreak, so the closure numbers aren’t a perfect measure of how many students and teachers are falling sick. Still, they provide a snapshot of where and how often big outbreaks are overwhelming districts.

Statewide, the student vaccine requirement isn’t expected to take effect until July — first for seventh grade and up, followed by kindergarten through sixth grade — and only after the vaccines get full approval from the Food and Drug Administration for those age groups. (Currently, only the Pfizer-BioNTech vaccine has received full F.D.A. approval — and that’s only for people 16 and older.)

For other childhood vaccines, California barred parents in 2016 from citing their religious views to get out of vaccinating their children, after the number of unvaccinated students crept dangerously high.

But for the Covid-19 vaccine, officials say, parents will be allowed to opt out if they feel it conflicts with their personal beliefs.

The rest of the news

This Tuscan farro soup is simple yet amazing.

The San Pedro Community Gardens are an oasis with deep immigrant roots.

What’s on TV this week.

I’m headed to San Diego soon to do some reporting. What should I write about?

Email me suggestions at CAtoday@nytimes.com.

And before you go, some good news

For years, the contributions of Chinese immigrants to the creation of Yosemite National Park went unrecognized.

Toiling in snowy conditions in the late 1800s, Chinese workers helped build the steep and winding roads that lead into the park. One Chinese immigrant worked as head chef of the grand Wawona Hotel for half a century. Others were hired as gardeners and laundry workers at hotels, The Fresno Bee reports.

This month, Yosemite officials formally honored these Chinese workers with the unveiling of a restored 1917 Chinese laundry building, where visitors can learn more about this lost history.

Thanks for reading. I’ll be back tomorrow. — Soumya

Mariel Wamsley contributed to California Today. You can reach the team at CAtoday@nytimes.com.

News Centerhttps://dropdowndeals.com
Breaking news from around the world, plus business, drop down deals, politics, style, travel, sport and entertainment.
Previous articleAn Umpire Opened the Door and the Astros Walked Right Through
Next articleIran Joins the Lineup at Asia Now