WASHINGTON — A Maryland couple facing espionage charges spent years collecting classified information, planning to sell it to a foreign country for as much as $5 million in cryptocurrency and then leave the United States, according to material laid out by prosecutors and the F.B.I. in federal court on Wednesday.

An F.B.I. agent read what he said were excerpts from encrypted messages between the couple, Jonathan and Diana Toebbe, from 2019, before they reached out to the foreign country and as they considered whether to sell the secret information about the nuclear reactors that power Virginia-class nuclear submarines. Mr. Toebbe expressed ambivalence, writing about one of their proposed plans: “It’s not morally defensible either. We convince ourselves it is fine, but really isn’t either.”

Ms. Toebbe, the agent said, responded: “I have no problem with any of it. I feel no loyalty to abstractions.” 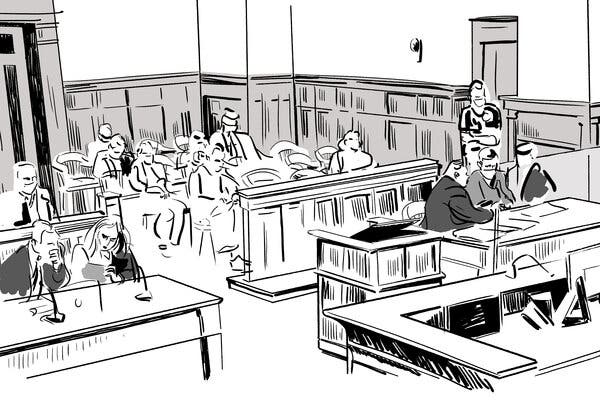 The Toebbes appeared in a federal court in Martinsburg, W.Va., on Wednesday.Credit…Wesley Allsbrook

The Toebbes are accused of attempting to sell closely held secrets of America’s submarine technology to an undisclosed foreign government. Both pleaded not guilty on Wednesday to one count of conspiracy to communicate restricted data and two counts of communication of restricted data in federal court in Martinsburg, W.Va.

The hearing also considered whether they could be granted bail. Mr. Toebbe offered no legal defense, and did not contest his detention. The magistrate judge, Robert W. Trumble, did not immediately rule on Ms. Toebbe’s detention, saying he would issue a written order later.

The F.B.I. still does not know the whereabouts of most of the information an agent said the Toebbes were offering to sell to the foreign government. It also has not recovered the $100,000 in cryptocurrency paid to them by the undercover agents as they pursued the case.

Arguing that Ms. Toebbe should remain in jail, prosecutors expressed concerns that she might still have access to the missing funds and could attempt to share the unrecovered data.

But Ms. Toebbe’s team argued vigorously against her detention, saying she had never had access to classified documents, needed access to her doctors and was not a flight risk. Ms. Toebbe also nodded along as her lawyer, Edward B. MacMahon Jr., stressed the need to allow her to look after the couple’s two children, ages 11 and 15.

Mr. MacMahon argued that the evidence in the case would show Mr. Toebbe stole the information and wrote the notes to the undercover officers while Ms. Toebbe played only a minor role in the scheme.

But Jessica Lieber Smolar, a federal prosecutor, disputed that characterization. Prosecutors argued that she helped devise the plan, and meticulously went through evidence that they said showed she had acted as a lookout for her husband, belying the idea that she thought they were just out for a leisurely weekend stroll.

Ms. Smolar argued that Ms. Toebbe posed a flight risk if allowed free before trial and that simply monitoring her location and ordering her not to use the internet could not prevent her from finding ways to share national secrets.

On Oct. 5, 2020, Ms. Toebbe wrote to her husband on the encrypted app, “I think we need to be actively making plans to leave the country.”

But Mr. MacMahon argued that various documents collected in the case showed that his client wanted to leave the country if former President Donald J. Trump had been re-elected.

“She’s not the only liberal that is wanting to leave the country over politics,” Mr. MacMahon said.

Prosecutors and the F.B.I. portrayed the Toebbes as beginning to make plans to sell American secrets as early as 2018. Prosecutors also said in court proceedings that the foreign country that had received the offer to sell the information voluntarily turned it over to the F.B.I., setting off the investigation into the Toebbes.

An F.B.I. agent who surveilled the couple, Peter Olinits, told the court that a letter sent by the Toebbes to the foreign government offering the classified material set a December deadline for hearing back, saying that otherwise they would offer the information to other countries. As a result, he said, federal agents, impersonating officials from the foreign government, began communicating with the Toebbes that month.

In a message left on a memory card hidden in a Band-Aid wrapper, the Toebbes asked for $5 million in cryptocurrency in return for some 51 packets of material — potentially 11,000 pages, Mr. Olinits told the court.

“This information was slowly and carefully collected over several years in the normal course of my job to avoid attracting attention and smuggled past security checkpoints, a few pages at a time,” the note on the memory card said, according to Mr. Olinits.

Mr. Olinits said the government did not know how Mr. Toebbe took the documents out of his workplace at the Washington Navy Yard.

Mr. Toebbe appeared in court in an orange prison jumpsuit, his wrists shackled together, apparent as he awkwardly raised his right hand as he was sworn in. Mr. Toebbe’s lawyer, Nicholas J. Compton, a public defender, said his client had waived a right to a detention hearing, meaning that he would be incarcerated until his trial.

Judge Trumble set a trial date of Dec. 14 for the Toebbes, though complex espionage cases are typically delayed.

Ms. Toebbe was brought in after her husband and was accompanied by two lawyers, including Mr. MacMahon, who has represented a number of Americans accused of spying, including Jerry Chun Shing Lee.

Mr. MacMahon argued that the tradecraft used by Mr. Toebbe in dropping the information was terrible, and said the F.B.I.’s contention that Ms. Toebbe was looking for people following them was wrong. “She never received any training,” Mr. MacMahon said. “She is a schoolteacher.”

But Mr. Olinits, under questioning from Ms. Smolar, said that during the first dead drop both of the Toebbes went to significant lengths to see if anyone was following them, walking more than a mile and a half from where they parked their car, dressing as hikers and bringing a camera to blend in with other people in the area.Mr. Olinits said he observed Mr. Toebbe leave information at a F.B.I. dead drop area with the assistance of Ms. Toebbe.

A federal prosecutor, Jessica Lieber Smolar, right, told the court that, facing the prospect of life in prison, Ms. Toebbe could try to flee the country.Credit…Wesley Allsbrook

Prosecutors showed videos taken from the first of the four dead drops allegedly used by the Toebbes. Mr. Olinits said the Toebbes showed good tradecraft, dropping the information quickly, then walking away in a manner intended to try to detect anyone following them. Ms. Toebbe looked on as prosecutors showed videos of her looking anxious, pacing and surveying the surroundings while her husband crouched to plant memory cards containing the classified documents in concealed places.

A note left at the final dead drop raised the prospect that Mr. Toebbe and his family might need to be extracted from the United States, according to an F.B.I. affidavit in the case. And the F.B.I. moved to arrest the pair immediately after witnessing the final drop, apparently out of concern that they might begin searching for other buyers.

During a raid on the couple’s home, the F.B.I. recovered a cryptocurrency wallet, shredded documents, $11,300 in cash and their children’s passports. Mr. Olinits said the Toebbes had a “go bag” with a computer, latex gloves and a USB drive. Their passports had expired and were being renewed by the State Department on an expedited basis.

Mr. MacMahon said his client was planning a trip in February to the Bahamas and was renewing her passport for that travel.

Ahmed Bendary
Ahmed Bendary is reporter at DDDNews a focus on health news.
Previous articleNew Chief of Women’s Soccer League Vows to ‘Get Our House in Order’
Next articleThe Astros Are the Latest Team to Have Boston on the Ropes