In Paris, a Straight Road to the Past

This article is part of our latest Design special report, about creative people finding fresh ways to interpret ideas from the past.

PARIS — When Napoleon III commissioned the urban planner Georges-Eugène Haussmann to modernize the dense, disjointed and pestilential mess that was mid-19th-century Paris, his instructions were summed up in three verbs: aérer, unifier and embellir. Make it airy, interconnected and beautiful.

Today, an apartment in a Haussmann-style building in Paris — an 1890s limestone rowhouse with wrought-iron balconies and oak parquet floors — distills the essence of the grandly remodeled metropolis. Renovated by the Parisian firm Jouin Manku as a pied-à-terre for Georges Bousleiman, 56, a real estate developer, the home, which sits on a corner in the opulent 16th Arrondissement, is ventilated with ceiling-high windows, unified with tones of cream and glints of brass and embellished with upholstered walls and custom furnishings.

“The simplicity of plaster and wood is the baseline that goes through everything,” said the architect Sanjit Manku, who led the project with the designer Patrick Jouin. “But there is also individuality. You use different rooms at different points of the day and in different scenarios. Some are more social; some are more introverted.”

Mr. Jouin and Mr. Manku reconfigured the flat, which had previously been broken into multiple units, so that it could serve as a workplace for Mr. Bousleiman and his wife, Bettina, while allowing their two teenagers to hang out and watch movies. 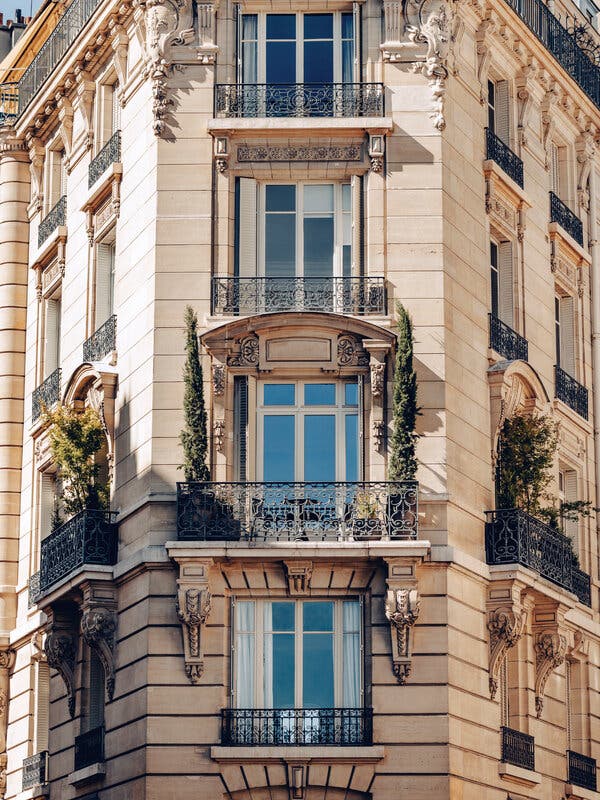 The building, in the 16th Arrondissement renovated by the Parisian firm Jouin Manku as a pied-à-terre for Georges Bousleiman, 56, a real estate developer.Credit…Jérôme Galland

At the prow of the corner building is a family room with a large custom fireplace, 10.5-foot ceilings and a pair of radiating offices. A formal living room follows through French doors; then the dining room. Beyond that are three bedrooms with silk-covered walls and custom beds with integrated lighting. (Jouin Manku designed all the home’s built-ins and many of the movable furniture pieces.) A pair of white marble bathrooms is across the corridor. (The American enthusiasm for the en-suite bathroom appears not to have found its way here.)

The small kitchen is at the far end of the unit, a number of steps — some Americans would consider them miles — from the dining room. There, a peninsula table seats the family for casual meals.

Gazing out the apartment’s oak-trimmed windows (whose grain is unconventionally unpainted to appease the modern hunger for tactility, Mr. Jouin said), drinking in the streetscape with its regimented, Mansard-roofed beauty, one could only be in Paris. Yet the apartment also summons other places that are dear to Mr. Bousleiman: Strasbourg, the Alsatian city where he is based, and the mountain village near Beirut, Lebanon, where he grew up.

Those leather-covered walls in the entrance hall where a horse’s head sculpture is stationed? They are a tribute to Les Haras, a grand hotel in Strasbourg converted from 18th-century royal stables that was a previous collaboration of Mr. Bousleiman and Jouin Manku. (The firm is known for updating spaces within magnificent old buildings, like La Mamounia, the storied hotel in Marrakesh, Morocco.)

The mural that covers all four dining-room walls? It is a hand-painted, semifantastical panorama of the buildings and landscape Mr. Bousleiman occupied in his youth. Here are rendered his family house, a grandfather’s house that dates from the 17th century, picturesque ruins, even pet trees. The artist, François Houtin, traveled with Mr. Bousleiman to Lebanon to see all this for himself and returned to the dining room with a tiny paintbrush.

“I was thinking something like one week, two weeks, one month,” Mr. Bousleiman said of the amount of time he expected the project to demand. After two weeks, Mr. Houtin had painted “less than half a square meter,” Mr. Bousleiman said, or about two square feet. The mural, which spreads over the sliding doors of a bar cabinet mounted on a wall, ultimately took six months. But the artist was reluctant to give it up and continued into the hallway, where he represented Mr. Bousleiman’s university among lush Lebanese foliage.

It doesn’t take long to realize that this stately apartment often veers into wildness. In designing the family room fireplace, Mr. Jouin and Mr. Manku riffed, at a blown-up scale, on traditional materials like cast iron and stone. But the iron appears outside, not inside, the chimney; and the stone is a carved slab used for the mantel that weighs a ton and a half. Their version of the mirror that is typically mounted above a fireplace not only reflects the view from the window opposite, but also serves as a television screen.

“We are terrible because we take every opportunity to invent something or do something which is not easy,” Mr. Jouin said.

The custom fireplace in the family room, which has 10.5-foot ceilings and two radiating offices.Credit…Jérôme Galland

Down the hall, the living room is decorated with casts of classical statues from the Louvre and large photographs by Jean-Christophe Ballot of abstracted white marble torsos and limbs. Amid all the pale oak and cream, a door at the end of the main corridor opens to a startlingly black marble powder room.

For Mr. Jouin, the difference between designing hotels and private homes is creating a living, breathing environment that will evolve with the residents rather than a static backdrop, like a stage set.

Or as Mr. Manku put it, “If you don’t start off with the idea of a bit of a collage, then how do the people living there begin to add their own things? They would have to think like the person who designed it, and then it’s never theirs.”

The designers were not always ready to relinquish their aesthetic authority, however. When Mr. Bousleiman asked that the living room sofa face the front door instead of the window, so he could see guests as they entered (“I’m an Oriental,” he explained about this mode of hospitality), “Patrick,” he recalled, “said no.” It would block the light.

News Centerhttps://dropdowndeals.com
Breaking news from around the world, plus business, drop down deals, politics, style, travel, sport and entertainment.
Previous articleHow Did Elephants and Walruses Get Their Tusks? It’s a Long Story.
Next articleThe U.S. economy slowed in the third quarter, growing 0.5 percent.

Yes, You Do Deserve a Little Treat