Out on the open water, he can forget about the disappointment and the frustration. He can take solace in the cool breeze. Finally nearing a return to the court for the Golden State Warriors after missing the past two seasons because of injuries, Thompson has found a new hobby that has been especially therapeutic.

“You can’t have a bad day when you’re on the boat,” he said.

So he fishes and explores deserted coves — and uses his Axopar 37 Cabin to avoid Bay Area traffic.

“It’s been so good for my mental health,” said Thompson, the star shooting guard who tore the anterior cruciate ligament in his left knee in the 2019 N.B.A. finals and then tore his right Achilles’ tendon before the start of last season. “When the days would get really tough, I would take a cruise into the city or toward Oakland or just be out in nature. It always helps.”

Thompson has come up with a couple of names for the boat. One is Nordic Knife. (As he recently explained to NBC Sports Bay Area, “She was made in Finland, so she’s Norwegian, I think.”) The other is Splash Express, for whenever friends are on board.

“I fell in love with all the little things,” Thompson said in an interview, “whether it’s navigating, cleaning her, tidying her up — all the stuff you would never think of when driving a car.”

Thompson is well aware that he often refers to his boat as if it were a living, breathing person.

He has gone so far as to adhere to certain seafaring superstitions. Among them: a hard-and-fast ban on bananas, since they are believed to invite bad energy to the boat. It is a difficult one for Thompson. “Because I love bananas,” he said.

Coach Steve Kerr encourages his players to have outside interests, for balance. Stephen Curry golfs. Draymond Green dabbles with broadcasting. Thompson pilots a high-end watercraft with supercharged twin engines and an enclosed cabin.

“Being on the water is a safe space for him,” Curry said. “He’s outside, and he has that freedom to go wherever he wants to go out there.”

Growing up in Southern California, Thompson was not the product of a “family of boaters,” he said. But he has always enjoyed the ocean. He finds the water peaceful and calming, and the goal of acquiring a boat of his own was spurred by Anthony Nuccio, his best friend since preschool. Nuccio would take Thompson fishing on his 1976 Aquasport.

“He kept talking about getting one for years,” Nuccio said. “We would send pictures of boats back and forth to each other.”

For a long time, Thompson made do with a dinghy, which he would board with his bulldog, Rocco. (Thompson did all the rowing.)

It was not until Thompson was injured that he was motivated enough to invest in a full-fledged watercraft. A couple of months after tearing his A.C.L., Thompson was rehabbing with Rex Butler, who is a sports performance specialist and a recreational boater. When Butler learned that Thompson was looking to buy something, Butler showed him photos of an Axopar. Thompson was smitten.

“I loved her lines so much,” he said.

At the time, Thompson was dealing with the anguish of not being able to play basketball. The days were long, and his rehabilitation was difficult. He knew he needed something to take his mind off his troubles. He needed a boat. He conferred with Nuccio, who found a dealer in San Diego named — believe it or not — Kenyon Martin, a brand manager for Seattle Yachts who happens to have the same name as the former N.B.A. power forward.

“I thought you’d be taller,” Thompson told Martin when he met him at his showroom.

Thompson and Nuccio browsed the inventory and then test drove an Axopar. Retail price: north of $300,000, though it was available at a discount because it had been lightly used. Thompson signed a $190 million contract extension in 2019 but still appreciates a deal. 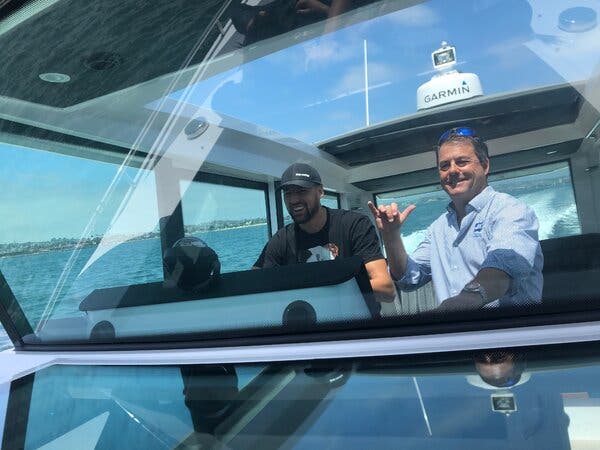 Klay Thompson and his boat dealer, Kenyon Martin, on his test drive.Credit…Courtesy of Anthony Nuccio

“Wow, this is it,” Thompson said as he took the wheel from Martin.

Martin customized the boat with underwater lights and an infrared camera so that Thompson could operate it at night. Martin also connected him with a boat captain who trained him.

“It’s not like a car where you just flip someone the keys and you’re like, ‘Yeah, you’re good to go,’” Martin said.

Thompson said it had taken several months before he felt confident enough to man the boat by himself. In the meantime, he leaned on Nuccio for guidance. Thompson also learned to spear fish.

“I love to move my body, and I was going through such a strenuous rehab,” he said. “So to be able to do a hobby that felt refreshing to me and see the world in a different way, it was a dream come true.”

Thompson eventually had the boat shipped to the Bay Area, where it became apparent that he was still grasping the nuances of boat ownership. Whenever he commuted to Chase Center, the waterfront arena where Golden State practices and plays its home games, he was leaving his boat in other people’s assigned spots at a nearby boatyard. Mike Brown, Golden State’s associate head coach, overheard that Thompson was causing some hubbub.

“He was just docking his boat wherever he wanted,” Brown said. “And I was like, ‘Klay, you can’t park your boat there!’”

Arvind Patel, the proprietor of the boatyard, enlightened Thompson on the protocols and was so charmed by him that he invited him to dock Splash Express next to his own 60-foot sailboat.

It was the start of an unlikely bromance between Thompson, a five-time All-Star, and Patel, a 70-something grandfather who runs start-ups in Silicon Valley — and does not like to disclose his exact age. (“I’m old,” he said.) Patel has taken an interest in teaching Thompson more about boating, and they recently took a day trip together in search of halibut.

“We caught two nice fish and had a wonderful time,” Patel said. “It’s actually kind of a pure friendship because I’m not that into basketball. I’m into it when the local team is winning. I’m a sunny-day fan. So now, if I need tickets, I say, ‘Hey, Mr. Klay!’”

Teammates have taken up Thompson on his open offer to join him on the high seas. A trip comes with the caveat that they are likely to make a cameo on Thompson’s Instagram feed.

“Got rook on the boat with me,” Thompson said in a recent post, gesturing toward the second-year center James Wiseman behind him. “He don’t know a damn thing, but I’m teaching him the ropes.”

Leandro Barbosa, a former teammate who joined Kerr’s staff last season, has been a regular. Barbosa and Thompson will take their mountain bikes with them and dock at one of the small islands in the bay so they can ride the trails.

Brown has so far resisted Thompson’s appeals to let him take him out.

Thompson, who could return to the court for Golden State by late December or early January, said he could see himself getting into sailing.

“The ocean and free diving and spear fishing and boating bring me joy,” he said, “second only to winning basketball games, really.”

News Centerhttps://dropdowndeals.com
Breaking news from around the world, plus business, drop down deals, politics, style, travel, sport and entertainment.
Previous articleOutside Hotlines for Athletes Are a Sign of Strained Trust in Sports
Next articleDan Brown introduces his book ‘Wild Symphony’ to Czech readers