More Economic Consequences of the Pandemic

It’s Wednesday. We’ll look at two stories from opposite ends of the economic spectrum that are linked by the pandemic. We’ll also hear from the actor Tony Roberts, who is appearing in an Off Broadway production of “Morning’s at Seven” that opens tonight. 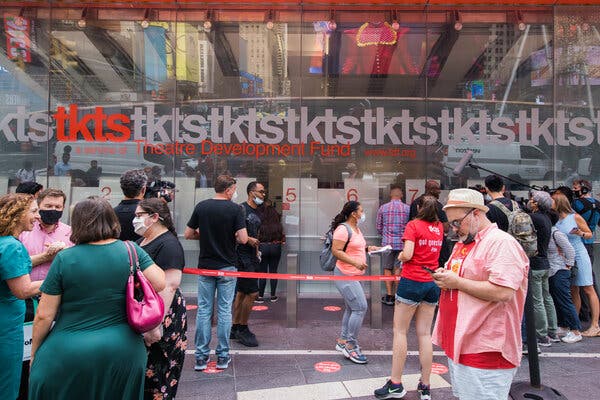 If you are looking for new evidence that the pandemic reached across the economic spectrum in New York, consider two stories about its consequences — very different consequences, but consequences all the same.

One is about a $2.1 billion state-funded lifeline for undocumented workers who did not have access to government relief. It sounds like a well-intentioned move, designed to provide one-time payments of up to $15,600, enough to make a serious dent in back rent or medical bills. The problem is that the fund has run out of money, and thousands of applicants might miss out.

The other story is about a campaign to attract big-spending foreign tourists to New York City. The campaign would help hotels and other tourism-dependent businesses and institutions, like restaurants, theaters and museums — all of which were devastated by pandemic shutdowns and restrictions.

First, the fund, known officially as the Excluded Workers Fund.

State officials announced that they would stop taking applications as of Oct. 8. They also warned that those who had applied in the two weeks before that might not be approved.

[A $2.1 Billion Pandemic Lifeline for Undocumented Workers Runs Out]

My colleagues Annie Correal and Luis Ferré-Sadurní write that the cutoff meant that thousands may never get a chance to apply. Among them are immigrants who do not have transportation or convenient access to community-based organizations that have been helping people assemble their applications.

All that has put pressure on Gov. Kathy Hochul to allocate more money — an early test of her progressive credentials. Hochul, a Democrat, made it a priority to speed up the payments after she replaced Andrew Cuomo, who resigned in August. The fund had been a contentious issue during the negotiations over the state budget earlier in the year, with Cuomo saying he was concerned about the risk of fraud.

Since then, community activists have called on Hochul to expand the fund by $3 billion in the next budget. Hochul said last week that her administration was looking at “short-term” solutions and that the discussion of additional money might be taken up again in time for next year’s budget.

The cutoff was upsetting for would-be applicants like Afshana Pervin, a restaurant and catering worker from Bangladesh who lives with her two children in Queens. After getting by with loans from acquaintances and help from the food pantry at DRUM, a community organization in Jackson Heights, she was counting on applying to the fund and paying back her debts.

But she could not establish her identity to begin the application process. Her passport had expired, and replacing it would take months.

“I cannot face my co-worker and my friend and tell them I cannot pay back the money,” she said.

As for the appeal to foreign visitors, the city’s tourism agency plans to spend $6 million on the campaign, using the theme “It’s time for New York City.”

The agency, NYC & Company, hopes the campaign will come in time to salvage the end-of-year holiday season. It is already switching the message on billboards in London and a few other cities from “New York City misses you too” to “New York City is ready for you.”

Its forecast for the number of visitors — 34.6 million this year — is slightly more than half the record-setting total of 2019. But only 2.8 million will come from outside the country this year, about 20 percent of the number two years ago.

Hotels and restaurants have gotten a boost from the reopening of Broadway theaters, dark since March 2020. Charlotte St. Martin, the president of the Broadway League, a trade association whose 700-plus members include theater owners and producers, said that most of the 77 performances in September were sold out or close to full.

“Since Broadway reopened, it’s definitely helping,” said John Fitzpatrick, who owns two hotels in Midtown Manhattan. “But we need the international travelers. They come during the week, they stay longer and they have an expense account.”

Soak in another warm, sunny day with temps reaching the mid-70s, New York. The evening will be cloudy with a low around 60.

In effect until Nov. 1 (All Saints Day).

Do you know the man climbing the stairs to the stage?

Several years ago, the actor Tony Roberts published a memoir called “Do You Know Me?”

He said the title stemmed from his being recognized on the street. After six Woody Allen films, 23 Broadway plays and many television roles, it happens.

Sometimes whoever recognizes Roberts cannot quite place him. After saying that he is not the other person’s cousin who never makes it to family reunions or that homeroom teacher who absconded with the assistant principal in junior high, Roberts explains that he is an actor.

“They say ‘What were you in?’ and I say ‘Serpico’ or this or that,” he said, “and then they ask the most terrible question anybody can ask an actor: ‘What are you doing now?’ It’s a terrible question if you’re not working.”

But Roberts is. He is appearing in a revival of “Morning’s at Seven,” the Paul Osborn play about four sisters, their husbands and the dysfunction that envelops them. It opens tonight at the Theatre at St. Clement’s, the 160-seat Off Broadway space configured from the sanctuary in the 1960s, when the rector was the Rev. Sidney Lanier, a founder of the American Place Theater and a distant cousin of the playwright Tennessee Williams. The church used to hold its Sunday service on the stage, placing the pulpit on the set of whatever play was being staged. It now uses the theater only on holidays.

Roberts said there is one moment when he feels his age — he will turn 82 on Friday. It is a moment that is not in the play: “Climbing up the rickety staircase that takes me from the dressing room to the stage level.”

“But even the cast members who are younger than I am are having the same problem,” he said, referring to a cast that includes Lindsay Crouse, Alma Cuervo, Judith Ivey and Dan Lauria.

“It’s a great stage, the largest Off Broadway stage in New York” in a Victorian Gothic building that dates to 1870, he said. “The one thing they haven’t managed to modernize is the staircase. It takes about five minutes to recover your breath once you’re up there. Hopefully my heart will hold out.”

I am on the F train
And two seats away is a man
Whose hair is too gray
For his sneakers.
He sits his iced coffee
On the space between us
Because it is too cold
To hold in his iPhone hands,
And I begin preparing
The furious words
I will say
If it tips over
And spills on me.
It never does,
But at least I was ready.

Glad we could get together here. See you tomorrow. — J.B.

P.S. Here’s today’s Mini Crossword and Spelling Bee. You can find all our puzzles here.