The Knicks Are Ready for a Sequel. The Good Kind.

What is this feeling, so sudden and new?

A surprisingly successful run last season helped the Knicks recapture the city’s imagination, much like the team had done in 1990s New York. That era of Knicks basketball is so beloved that it has spawned documentaries, books and endless nostalgia, even though it ended without a championship. The heydays of Patrick Ewing, John Starks and Latrell Sprewell re-established the team as a marquee franchise, a luster that has eroded over the last two decades of mostly despair for the tortured fan base.

“After so many years of the Knickerbockers being an accident waiting to happen, you didn’t really watch them — you rubbernecked them, like you would a fender bender on the West Side Highway,” said Steve Somers, the popular radio host for WFAN. “Now, the Knickerbockers are generating some new, reborn excitement and enthusiasm.”

These Knicks will attempt to build on last year’s success as they begin the season at home against the Boston Celtics on Wednesday. They’ll likely be one of two types of follow-ups: ideally, “The Godfather: Part II” — a quality sequel that builds on the original — or “The Godfather: Part III” — a rudderless ship.

“It’s certainly not easy to do one year, but the second year is where that work ethic, the culture comes into place,” said Chris Dudley, who was a reserve center for the Knicks from 1997 to 2000. “Because too often you see teams have a great year and then they kind of forget a little bit how hard it was to get there and they slide back.”

But if there’s one person intimately familiar with trying to sustain great play in New York, it is the man shepherding this iteration of Knicks basketball and restoring the franchise to the glory days Dudley saw up close.

“There’s a strong connection from this Knicks team to when I played there in Tom Thibodeau,” Dudley said, referring to the Knicks head coach. “He fit right into that mentality of: ‘Hey, we’ve got a job to do. Let’s get it done.’ That’s the work ethic, the culture.”

Thibodeau was an assistant coach for the Knicks from 1996 to 2003, meaning that as he reveled in the rise of an empire he also felt the embers when it began to crash and burn. In his first season as head coach last year, Thibodeau lifted the Knicks’ defense to fourth in the league from 23rd. The Knicks opted for a more physical style rather than finesse — a Thibodeau staple, and one Knicks fans grew to appreciate both last year and when it came from the sharp elbows of Anthony Mason and Charles Oakley in the 1990s.

“Culture” for a team is, as the typically no-nonsense Thibodeau noted to reporters after a preseason practice, an ambiguous buzzword. Whatever the best word is, the Knicks have begun to shift the narrative about themselves in relatively short order after decades of futility.

They have a young star in Julius Randle, a budding star in RJ Barrett, and dynamic up-and-comers in Immanuel Quickley and Obi Toppin. This off-season, the Knicks signed quality veterans in Kemba Walker and Evan Fournier to bolster their stable of experienced role players, like Taj Gibson and Alec Burks. 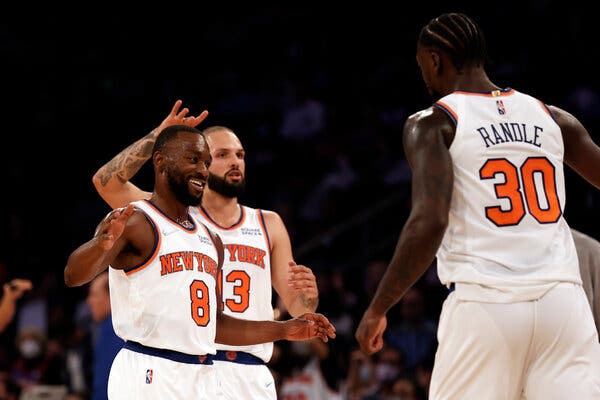 Kemba Walker, left, and Evan Fournier, center, should relieve some of the offensive pressure on Julius Randle, right.Credit…Adam Hunger/Associated Press

“What is culture? Culture is what you do every day,” Thibodeau said. “It’s not any one particular thing. It’s how you approach everything. Draft. Free agency. Trades. Player development. Practice. Travel. Summer program. It’s not blitzing the pick-and-roll.”

Toppin is entering his second season as the rare Knick who has only known playing for a winning version of the team. “Our culture is competing every single day to help the next person,” Toppin said. “White Team is helping Blue Team. Blue Team is helping Green Team. Everybody is helping each other in practice so that, when it comes to the game, everyone is ready.”

There is an organizational cohesiveness — at least outwardly — that was lacking before Thibodeau and Leon Rose, the team president since March 2020, took the lead.

“It just goes to show you when you put direction in, and then you get a quality coach that stresses defense and unselfishness, those are things that help get wins,” said Rick Brunson, who appeared in 69 games for the Knicks between 1998 and 2001. “And then you put a product out there, it becomes magical.”

James L. Dolan, the team’s mercurial owner with a reputation for impulsive and often detrimental meddling, has mostly stayed out of the limelight. Thibodeau said Dolan “has given us everything we’ve asked for.”

Among the moves the Knicks made this summer: signing Randle to a long-term extension instead of letting a looming free agency saga play out, and inking Walker to a bargain deal after the Oklahoma City Thunder bought him out. The last time the Knicks had a young All-Star to build around in Kristaps Porzingis, they unexpectedly traded him in 2019 for a return that, even at the time, seemed paltry. None of the players the Knicks acquired in that deal are still with the team.

Now the Knicks have a new challenge: to prove they’re not a fluke.

“Consistency and sustaining what made you win in the first place is always a challenge,” said Stan Van Gundy, a TNT analyst who has coached four N.B.A. teams. His brother, Jeff, was the coach of the Knicks when they last made the finals, in 1999. “But I think the way it needs to be done, and certainly the way Tom will do it, is you continue to do all of those things that got you there in the first place.”

There are plenty of reasons to believe the Knicks’ ceiling is even higher this season: They’ve given Randle more offensive weapons (Walker, Fournier) to take the pressure off him after the team struggled on that end last year. Mitchell Robinson, the 23-year-old center, will, if healthy, add another dimension as a shot blocking rim-runner, which the Knicks missed in the playoffs against the Atlanta Hawks. And with two other Eastern Conference contending teams in flux as a result of a possible trade (Ben Simmons and the Philadelphia 76ers) or an unvaccinated player (the Nets’ Kyrie Irving), there is a real opportunity for the Knicks to level up.

Still, as Ernie Grunfeld, the architect of the Knicks throughout most of the 1990s, can attest, “You need to win.”

“New York is about winning. And they’re doing that,” he added, “New York wants a team that plays hard and leaves everything out on the floor and plays together and plays basketball the right way.”

“It was electric. It was a great place to be,” Grunfeld said. “We were competitive every night. We were a team that other teams feared playing against. They were celebrities everywhere. It was a happening place in New York at the time.”

As much as many N.B.A. observers pay tribute to the blue-collar persona of Thibodeau’s teams, his coaching record is more complicated. He’s had a history of quickly wearing out his welcome and not being able to build off success.

Knicks Coach Tom Thibodeau had success in his first season, but he quickly wore out his welcome in past coaching forays.Credit…Frank Franklin II/Associated Press

Thibodeau led a resurrection in 2010-11 in his first year as a head coach of the Chicago Bulls. They had the best record in the N.B.A. (62-20) but lost to the Miami Heat in the Eastern Conference finals in five games. It ended up being the only time the team advanced past the second round in five seasons under Thibodeau. While it was the second most successful stretch in Bulls history, it was marred by injuries and Thibodeau’s clashes with the front office.

Then came a roller-coaster tenure in Minnesota, during which Jimmy Butler, then the team’s best player, became alienated and demanded to be traded. Thibodeau was sent packing in the middle of his third season. A common criticism in both locations was that Thibodeau’s gruff style grated on players and management alike and that he tended to overplay his stars, leaving them tired down the stretch. Last year, Randle was No. 1 in the league in minutes played. Old habits die hard.

So do old reputations.

The burst of optimism surrounding this team echoes that of the 2012-13 Knicks led by Carmelo Anthony, who finished the regular season with a 54-28 record and won a playoff series. In the off-season afterward, their biggest move was trading for Andrea Bargnani, who played poorly, and the Knicks missed the playoffs. Phil Jackson took over the team the next year, ushering in a new period of inefficacy for the team.

The current Knicks seem different. There is, for now, front office and roster continuity. The off-season didn’t feature any impulsive trades or long-term contracts for past-their-prime players that would limit cap flexibility. Players like Toppin are showing real development, as was indicated in the Knicks’ preseason opener when he showed off his ball handling. The Knicks should be better.

But if they’re not? If last season was a flash in the pan — a Penn Station-size tease — the path forward for the Knicks becomes much murkier.

News Centerhttps://dropdowndeals.com
Breaking news from around the world, plus business, drop down deals, politics, style, travel, sport and entertainment.
Previous articleNebraska Congressman Indicted in Campaign Finance Case
Next articleThe Seven Phases of Rebuilding in the N.F.L. (The First Is Denial.)