The S.E.C. Weighs In on Meme-Stock Mania 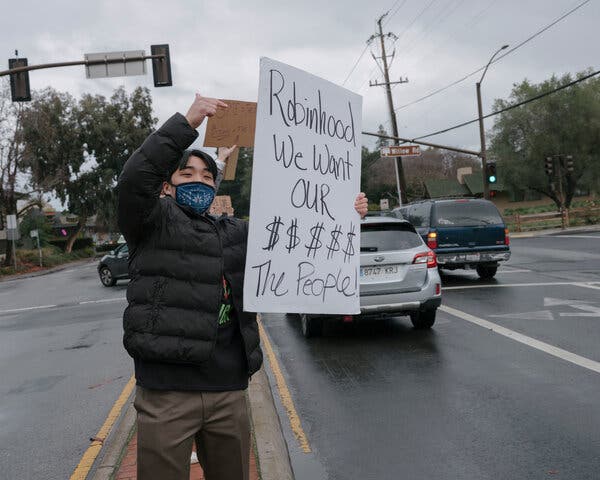 Nothing to see here?Credit…Ian C. Bates for The New York Times

The frenzied trading in shares of GameStop, AMC and other so-called meme stocks in January led to big losses for some hedge funds, an outcry from retail investors who were abruptly shut out from trading and calls from Capitol Hill to overhaul market rules. But a long-awaited S.E.C. report about those events, released yesterday, concluded that the markets operated largely as intended, debunking conspiracy theories. The report proposed no policy changes.

Is that it? The 45-page report was simply meant to describe events, a senior S.E.C. official told reporters. But many observers anticipated much more, considering that the S.E.C. chairman, Gary Gensler, has hinted at big changes to the way markets work.

What about payment for order flow? Gensler recently suggested that the way some popular retail brokerages are compensated by bigger Wall Street firms may have to change. Payment for order flow — when brokerage firms sell the right to execute retail investors’ trades to bigger trading houses, like Robinhood does with Citadel Securities — has long drawn criticism about conflicts of interest. (A class-action suit by retail investors against Robinhood took particular issue with the practice.) These concerns were noted in the S.E.C.’s report, but payment for order flow was not fundamentally challenged.

And settlement times? Speeding up the settlement cycle, the report suggested, could help avoid a repeat of the January trading chaos. At the peak of the meme-stock surge, Robinhood and other platforms limited trading in certain shares after the industry-run clearinghouse that settles most stock trades — a process that takes two days — demanded billions in additional cash. The S.E.C. said that the clearinghouse’s demands were a sign of the market working normally, but policymakers should consider ways to speed up settlement times to reduce the impact of future margin calls. Robinhood has pushed this point since it was caught out during the meme-stock mania.

Gamification? The report singled out the ways that trading platforms may encourage excessive trading through gamelike prompts as ripe for new rules, in tune with a recent speech by Gensler taking issue with “psychological nudges” in trading apps. In March, Robinhood removed a feature that set off animated confetti when users reach various trading milestones.

Tyler Gellasch, a former S.E.C. lawyer who now heads the Healthy Markets Association, called the report a “heavily negotiated document” that “was never going to break new ground.” Still, it will serve as “one more piece of evidence to support market structure reforms,” he said.

President Biden’s paid leave ambitions may be curtailed. His proposal for 12 weeks of leave for new parents, caretakers and those with serious medical conditions may be drastically shortened as Democrats seek ways to cut costs from his $3.5 trillion spending plan to appease moderates. The plan’s defenders said more generous leave would bolster the U.S. labor market.

The F.D.A.’s Covid booster plan could deal a blow to Johnson & Johnson. The agency will allow people to get a different vaccine as a booster than what they originally received. That could reduce the use of J.&J.’s shot: A study presented last week showed that recipients of that single-dose vaccine who received a Moderna booster saw a 76-fold rise in antibody levels, compared with a fourfold increase after an additional J.&J. dose.

Axel Springer ousts a top editor over workplace behavior reports. The media giant dismissed Julian Reichelt from Bild, Germany’s most powerful newspaper, after The Times reported on details of his relationship with a trainee. The scandal cast a shadow on Axel Springer at a crucial moment, as the KKR-backed media company prepares to close its takeover of Politico.

Bill Gates was warned about emails to a female employee in 2008. Microsoft executives told the billionaire, then the company’s chairman, that the “flirtatious” messages were “inappropriate.” A spokeswoman for Gates called the claims “false, recycled rumors.” The Times previously reported that the Microsoft co-founder had pursued female employees.

A labor shortage hit Zillow’s stock. Shares in the real estate company fell nearly 10 percent yesterday after it said it would stop buying and flipping houses for the remainder of the year. Zillow said it didn’t have enough on-the-ground workers to run the business, though competitors were skeptical.

When will oil peak?

Oil prices are trading at seven-year highs, with the cost of U.S. benchmark crude up 70 percent this year, at more than $80 per barrel. It’s part of a global energy crunch that is pushing prices higher for all types of fuels, including natural gas and coal.

Many Wall Street forecasters believe oil prices are about to peak. Oil usage is up from 2020 but below what it was in 2019, when oil prices were lower than they are now. Analysts at Goldman Sachs last week predicted that the price of a barrel of oil could average $85for the next few years.

But some traders are betting oil will rise much more. The most widely held option is one that pays out if oil rises higher than $100 a barrel by the end of December. Options trades with strike prices as high as $200 by the end of next year have also been made lately, according to The Wall Street Journal.

Who is right? The question of whether oil prices have nearly peaked or are about to rise much higher rests on what’s driving them up in the first place. Two possibilities:

“Perhaps the most immediate risk posed by cryptocurrencies stems from the anonymity they allow. The United States does not permit large numbers of dollars to move both anonymously and electronically.”

Colin Powell, who died yesterday at age 84, is remembered for his many roles in government, including secretary of state, chairman of the Joint Chiefs of Staff and national security adviser. But he’ll also be remembered as a friend and adviser to corporate America.

Powell regularly worked in the business world between stints in government. In the 1990s, he was on the board of AOL. And soon after stepping down as secretary of state in 2005, he was hired by the venture capital firm Kleiner Perkins as a “strategic limited partner” before joining boards like that of the fuel cell company Bloom Energy. His work as a board member of Salesforce came to light in 2016 when leaked emails showed his frequent messages to the C.E.O. Marc Benioff on everything from small talk to potential M.&A. targets.

“Thank you General Powell for everything you did for me,” Benioff tweeted yesterday. Steve Case, the former AOL chief, added on Twitter, “Deeply saddened by death of Colin Powell, a friend & partner for 25+ years.”

News Centerhttps://dropdowndeals.com
Breaking news from around the world, plus business, drop down deals, politics, style, travel, sport and entertainment.
Previous articleCan Skeletons Have a Racial Identity?
Next articleThe Soldier From the Bronx