The Soldier From the Bronx 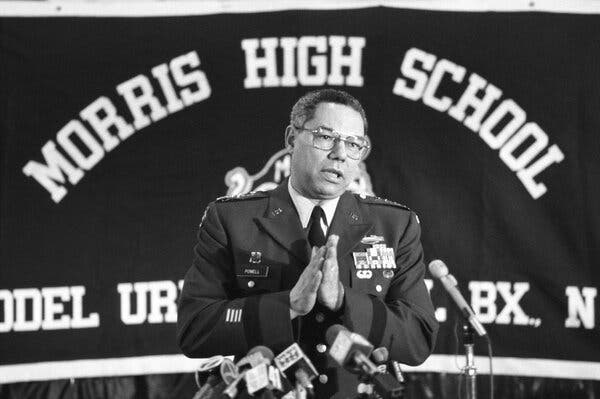 Colin Powell, who grew up to be the nation’s top soldier and its top diplomat, remembered where he came from — he once said that he had left the Bronx but that “the Bronx never left me.” After his death on Monday, the Bronx remembered him.

“We like to take credit for people who come out of the South Bronx,” said Harry DeRienzo, the president emeritus of the Banana Kelly Community Improvement Association, a redevelopment group in the area where Powell grew up, “and he’s somebody people are proud of.”

At the City College of New York, where the Colin Powell School for Civic and Global Leadership, which includes the social science department as well as leadership development and public service programs, the dean posted a statement that said every graduate of the school “is a part of his legacy.”

“This school is his,” the dean, Andrew Rich, wrote. “His pride in this place gave all of us strength.”

Powell himself had endorsed de Blasio’s predecessor, Michael Bloomberg, in 2009, when Powell was a grand marshal of the West Indian American Day parade. That was five years after Powell had joined Bloomberg to push the button that sent the ball in Times Square on its descent as 2005 began.

“One of the things about Colin Powell is that he is everybody’s favorite,” Bloomberg said then.

Powell was born in Harlem to parents who had immigrated from Jamaica. They moved to the South Bronx when he was a child — first to an apartment on Fox Street, then to another apartment on Kelly Street. DeRienzo said that in 1943, when Powell’s family arrived in the Bronx, “You had an integrated neighborhood, an area where people had an expectation of doing well like prior immigrants.”

Their neighborhood was the setting for the 1981 movie “Fort Apache, the Bronx.” Powell said in his 1995 autobiography “My American Journey” that the movie presented the area as “an urban sinkhole, block after block of burned-out tenements, garbage-strewn streets and weed-choked lots.”

“That is not quite the Hunts Point I was raised in, although it was hardly elm trees and picket fences,” he wrote. “We kept our doors and windows locked.” He said that burglaries were “common” and drug use “was on the rise.”

He remembered other sights and sounds of the neighborhood. There were Saturday double-features at the Tiffany Theater, a short walk from the four-bedroom apartment where his family lived for most of his boyhood.

He remembered running through Van Cortlandt Park with the track team from Morris High School. He remembered the school, which he visited in 1991 for the first time since his graduation day in 1954. “I remember the feeling that you can’t make it,” he said. “But you can.”

Powell’s diploma is on display in the building that housed Morris Park High School, now home to the Bronx International High School. He said he graduated with an average of 78.3.

He also remembered drug dealers in the 1950s working the corner at the end of the street where he grew up. And while he remembered that there were egg creams and seltzers at the candy store down the block and that “every few blocks you found a Jewish bakery and a Puerto Rican grocery store,” he said he did not recall any Black-owned businesses.

Powell went on to City College, where he discovered the Reserve Officers’ Training Corps and graduated with the rank of cadet colonel. As he rose through the ranks in the Army, his old neighborhood went through what he called “the tragedy of the Bronx.”

“I’ll never forget the day I drove through with my young children and pointed to an empty lot and said that was where I grew up,” he said in 2010. The lot, surrounded by a metal fence, had replaced the four-story walk-up in which he lived with his parents and his older sister. The Tiffany Theater is also gone — the building was a furniture store and later still a lumber warehouse.

A short and sweet forecast: It’s going to be a sunny day in the mid-60s with temps dropping to the high 50s at night.

In effect until Nov. 1 (All Saints Day).

A surge in Asian residents is transforming Long Island City

Long Island City, at the western edge of Queens, was an industrial area that became a haven for artists and Italian immigrants — and, in 2019, it was primed to become home to Amazon’s second headquarters. The company later backed out of that plan.

New census data revealed a surprise increase in New York City’s population over the past decade, driven by a surge in Asian residents. And Long Island City is the neighborhood with the fastest-growing Asian population, a microcosm of a demographic shift.

My colleague Nicole Hong writes that the surge in Asian residents across New York City helped boost the city’s population by nearly 8 percent from 2010 to 2020, surprising demographers who had expected it to shrink.

The surge in Asian residents has transformed neighborhoods from Bensonhurst in Brooklyn to Parkchester in the Bronx — and could reshape New York’s political representation. In June, a record six Asian American candidates won their Democratic primaries for City Council, including the seat representing Long Island City, where the nearly 11,000 Asians in the neighborhood make up slightly more than a third of its population.

[Inside the N.Y.C. Neighborhood With the Fastest Growing Asian Population]

The growth there has been at least partly driven by students and recent graduates from China and Korea who are drawn to new apartment buildings that are one subway stop from Manhattan, but cost less.

But the story of the new Long Island City is not just a story of upward mobility. The Asian population is rising at the Queensbridge Houses, the country’s largest public housing complex. Immigrants from China, Korea and Bangladesh have moved in after they could no longer afford to live in areas like Lower Manhattan or Astoria in Queens, according to tenant advocates. In 2019, Asians made up 11 percent of the tenants in the complex, according to a recent court filing.

In other parts of the city, anti-Asian attacks have compounded fears during the pandemic. A handful of attacks occurred in Long Island City, but the large Asian population has provided a sense of safety, said Elliot Park, whose family electronics business has been operating in the neighborhood since 1984.

“There was really no anti-Asian hate stuff around us except in the subway,” he said. “But on the street? Forget about it. There’s going to be 10 other Asians behind you.”

The A train was quiet and nearly empty as I rode downtown after a meeting in Midtown. Across from me was a young man with an extremely large plastic container of peeled garlic cloves.

Every so often, he would unscrew the lid and let the garlic aroma fill the subway car. Then he would intently re-tighten it until it was time for the next infusion.

Glad we could get together here. See you tomorrow. — J.B.

P.S. Here’s today’s Mini Crossword and Spelling Bee. You can find all our puzzles here.