By News Center
Derwin James of the Chargers, left, and Jalen Ramsey of the Rams are among the new breed of versatile N.F.L. defenders.Credit…Kyusung Gong/Associated Press
Credit…Stephen Brashear/Associated Press

COSTA MESA, Calif. — As Derwin James recovered from his second significant injury in back-to-back seasons, the Los Angeles Chargers safety found an unexpected way to help him remain one of the most versatile defenders in the N.F.L.

For two hours a day last season, James played “Madden 21,” the N.F.L. video game developed by EA Sports.Playing the game was fun, he said, but it also helped him see what his job is all about — flexibility.

“It really carried with me,” James said in an interview. “Things are kind of moving slow for me. I’m seeing the ball and I’m just in the right spot.”

Now finally healthy, James will toggle between alignments inside the first-year coach Brandon Staley’s scheme, much like the video game avatars he spent hours controlling.

James exemplifies the kind of player coaches seek today — an athlete who is mentally capable of juggling multiple assignments and can physically execute them. Most of the top N.F.L. defenses feature at least one player who fits that description, and some coaches, out of necessity, are now putting rookies into roles they were originally not drafted to perform. To say these athletes play a position is to understate how much territory they cover and how broad their responsibilities are.

“I think more people in the N.F.L. understand the type of flexibility you have to play with,” Staley said in an interview. “It requires a type of hybrid player that wasn’t common 20 years ago.” 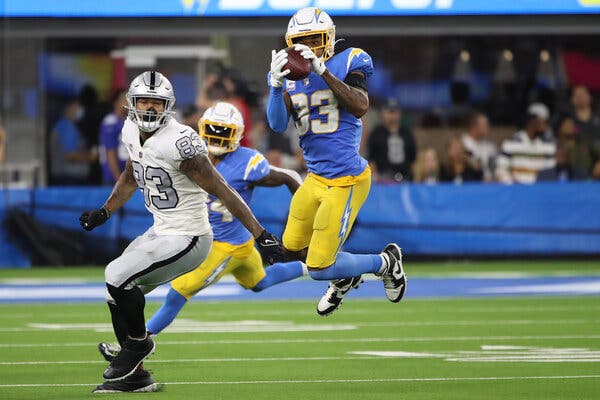 James intercepted a pass in a game against the Las Vegas Raiders on Oct. 4. Credit…Katelyn Mulcahy/Getty Images

The “positionless” trend, while becoming more popular, is not necessarily new. Defenses for years have deployed nickel and dime packages — formations that typically swapped linebackers for extra defensive backs and required versatile players.

The Hall of Fame safety Troy Polamalu showed range in his career with the Pittsburgh Steelers by leaping over the line of scrimmage to make tackles in the backfield, and he caught interceptions while lurking in coverage. Many players today cite Kansas City safety Tyrann Mathieu’s role at Louisiana State and in the N.F.L. as an inspiration for their playing style.

But as offenses applied more exotic pre-snap motions, varied their substitution packages with different assortments of skill-position players, and as more quarterbacks exploited opponents with their legs, defenses needed to change. General managers put a premium on players with an elastic skill set.

In recent years, the Los Angeles Rams traded for Jalen Ramsey, the Steelers acquired Minkah Fitzpatrick and the Seattle Seahawks brought in Jamal Adams. Each team doled out at least one first-round draft pick in the exchange.

Ramsey last off-season became the league’s highest-paid cornerback. Adams, who in 2020 broke the record for sacks by a defensive back in a season (9.5), in August became the N.F.L.’s richest safety.

But he missed 11 games in 2019 with a stress fracture in his foot and all of last season with a torn meniscus. Still, his performance as a rookie compelled the Chargers to exercise his fifth-year option.

According to the analytical website Pro Football Focus, James lined up in the box for 418 snaps and took 216 snaps at deep safety as a rookie. He also took 166 snaps as a slot defender and 205 snaps on the edge. That resulted in 105 tackles, three interceptions and 3.5 sacks. His play earned him a Pro Bowl nomination and he was named to the All-Pro first and second teams.

“I’ve never seen anybody do what Derwin James was able to do at that size to be able to play anywhere,” said Daniel Jeremiah, a former N.F.L. scout with the Eagles, Browns and Ravens who is now an analyst for NFL Network.

James said his coach, Brandon Staley, “opened his mind to a different side of football.”Credit…Kyusung Gong/Associated Press

James’s potential showed in his first game. During one drive against Kansas City, he crept toward the line of scrimmage as a pass rusher on a blitz and sacked Patrick Mahomes. Two plays later, he recognized a pass, sprinted toward the end zone and swatted the ball away from receiver De’Anthony Thomas.

On the day Staley was introduced as the Chargers’ new coach in January, Staley and James briefly discussed James’s usage. Months later, James said his new coach “opened his mind to a different side of football.” Because of James’s leadership skills and intelligence, Staley designated James as the defense’s signal caller, a role traditionally given to middle linebackers.

Staley’s teaching method with the defense, he said, is to have players think conceptually rather than memorizing certain plays or one specific positional duty. Cornerbacks, for example, must know a safety’s responsibility and technique in each coverage. If they then need to play in that alignment, they will understand the approach.

“On the front end, you could say there’s more on their plate, but over time, you’ve expanded their foundation,” Staley said. “We think that the cumulative effect, once it takes hold, has a really powerful effect on a player because they understand the game at a higher level.”

At practices, James often seeks out challenges to test his versatility. At training camp in August, he would compete against receiver Keenan Allen in man coverage during one drill, then would stand near the line of scrimmage and rush the passer in another.

Through six games, James leads the team in tackles (50) and has an interception. During the Chargers’s 47-42 win against the Cleveland Browns on Oct. 10, James posted 16 tackles and aligned in the deep middle of the field, in the slot and in man coverage. He also rushed the passer from the line of scrimmage and secured a strip-sack on Baker Mayfield.

“When stuff happens in a game, I’ve already envisioned myself doing it four or five times in practice,” James said on how he manages so many assignments. “It’s just like studying for a test and you’re waiting on the answers you already know.”

Staley used Ramsey in similar ways in 2020 as the Rams’ defensive coordinator, and it led to Ramsey achieving his best season since he was drafted in 2016. After Ramsey played mostly outside cornerback with the Jaguars, Staley shifted him inside to the Rams’ “star” position, allowing him to play against receivers in the slot and not be secluded away from the formation.

The Rams’ new defensive coordinator, Raheem Morris, has expanded that role, and Ramsey played inside more often. Ramsey said sometimes even he does not know where he will play until the game plan is installed Wednesday or Thursday. That constant shuffling can confuse a quarterback and offensive linemen trying to identify him before the snap.

“It gets me into more action,” Ramsey said. “Teams won’t be able to get away from me and it can help me affect my teammates and the game in a positive way.”

Ramsey on the sidelines in a game against the Colts in September.Credit…Zach Bolinger/Associated Press

Micah Parsons, the Dallas Cowboys rookie, expects the same kind of versatility from himself. Dallas drafted Parsons in the first round as a linebacker, but because of injuries to the defensive line, he has taken snaps as an edge rusher. In his first game at the position, he registered a sack and hit Chargers quarterback Justin Herbert four times.

Isaiah Simmons, a hybrid defender from Clemson, said some teams asked him before the 2020 draft if he could pick just one position.

“My thought process was, ‘Why limit me?” Simmons said in an interview. “If I can do multiple, it’s like having 12 people out there on the field.”

The Arizona Cardinals agreed, and drafted him in the first round. Last season, Simmons trained at six different positions, making 54 tackles and two sacks and catching an interception.

Fitzpatrick, the Steelers defender, said he prepares for his multifaceted role by studying film, drawing out certain formations and reviewing his notes on Saturday and Sunday.

By game time, he said is comfortable with whatever is required of him. Fitzpatrick, who enters unrestricted free agency in 2023, said he enjoys moving around in the secondary because it confuses offenses.

Considering the precedent Ramsey and Adams set with their recent contracts, it could also help his wallet.

“I think it adds value to you as a player,” Fitzpatrick said. “I think it helps the team, too, when you have guys that can do that.”

News Centerhttps://dropdowndeals.com
Breaking news from around the world, plus business, drop down deals, politics, style, travel, sport and entertainment.
Previous articleVinyl Is Selling So Well That It’s Getting Hard to Sell Vinyl
Next articleIndia’s vaccine campaign hits a billion doses, turning an overwhelming tide.