TV Was an Alien World for Golshifteh Farahani. Then Came ‘Invasion.’

Golshifteh Farahani did not fully realize what she was getting herself into when she signed up for the new science-fiction series “Invasion,” debuting Friday on Apple TV+.

Grilling the producer and writer Simon Kinberg, who created the show with David Weil, did not entirely reassure Farahani, 38, an Iranian-born actress who relocated to France in 2008 and is best known for her subtly expressive performances in dozens of international films.

“I remember I heard from Simon that she’s going to kill an alien with a machete or something,” Farahani said of her character, Aneesha. “I was like, ‘Are you kidding me?’” 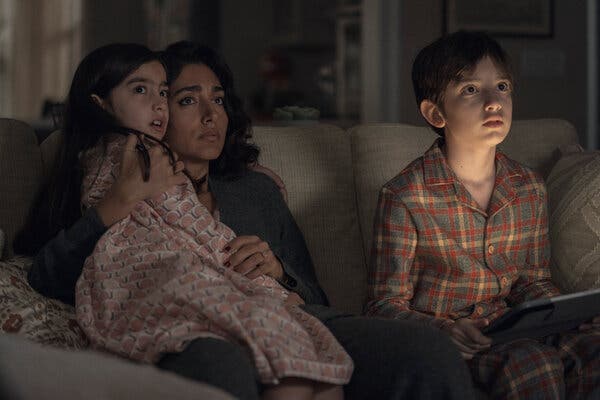 From left, Tara Moayedi, Farahani and Azhy Robertson in a scene from “Invasion.”Credit…Apple

Farahani is not new to action, having starred in the likes of Ridley Scott’s “Body of Lies” and the Chris Hemsworth vehicle “Extraction.” But she has built her global reputation on more auteur type fare, including films by the Iranian master Asghar Farhadi (“About Elly”) and Jim Jarmusch (“Paterson,” in which she played Adam Driver’s happily eccentric wife).

“I just love her presence,” Jarmusch said by phone. “I love her mischievous eyes, her playfulness. She has a very positive spirit as a person.”

Farahani isn’t yet a household name stateside, but her presence reaches much farther than her indie-heavy résumé might suggest. She is the kind of global style icon who sits in the front row at Paris Fashion Week and models Cartier jewelry. She has amassed nearly 12 million Instagram followers. One thing Farahani had not done, however, was a TV show (besides a voice-over role).

“I was one of those dinosaurs who was so loyal to movies and cinema,” she said. “I never took any proposition seriously because it was a bit like I wanted to keep cinema alive.”

And so she signed on, and she learned on the job.

For Kinberg, who cast her first — ahead of even the “Jurassic Park” veteran Sam Neill — Farahani sets the tone of the series, which is inspired by “War of the Worlds” and takes place across multiple countries.

“It’s an alien-invasion show, but it’s really about the nuance and vulnerability and the humanity of the characters,” he said on the phone. “And that’s something that she knows how to play, no matter where she’s playing it.”

Farahani, who is refreshingly candid and freewheeling in conversation, spoke earlier this month from Spain, where she was on vacation with her parents (whom she had just flown in from Iran). After that break, she planned to return to balancing art and bullets, filming an Arnaud Desplechin film with Marion Cotillard followed by a sequel to “Extraction.” These are edited excerpts from the conversation.

“I just love her presence,” Jim Jarmusch said of Farahani. “I love her mischievous eyes, her playfulness. She has a very positive spirit as a person.”Credit…Sofia Gomez Fonzo for The New York Times

At first Aneesha’s story line is almost like an intimate stand-alone drama nestled within a big action movie. Is that how you approached it?

I was really proud of the way they are internalizing the story in Aneesha. I have a weakness when it comes to independent cinema: Whenever there is a small drama, I’m really drawn to it. And our story was a bit like that. I’m really proud of this project because it’s not just a blockbuster — there’s something more going on. It was the most extraordinary experience of my whole life, this series.

One of the very first things we see is Aneesha figuring out that her husband is cheating on her, and those scenes are mostly nonverbal — we read everything on your face. What was it like playing them?

I’m surrounded by women like Aneesha who — because of comfort, not because of necessity — chose to be a housewife, a mom. I had been observing, so I knew that very well: how you want to please, how you want the children to be amazing. And then of course everything ends up to be [expletive] at the end of the day. So I could feel it in my bones.

It’s funny, there’s only one type of woman I’m jealous of: the ones who just find a husband and in one night they have everything. Sometimes I would love a man to buy a house and a car for me. I’ve built my life from scratch so I’m jealous of that. And of course my friends say, “Oh you cannot be that.” But I’m the one who was 14, working my ass off.

Were there any particular challenges that came with the switch to TV?

They were so many things. I was thinking, “Apple is going to own me for the next God knows how many years.” It was also practical stuff, like the fact that we didn’t have all of the scripts — we only started with the first two, and we didn’t have the rest of the episodes. I couldn’t imagine how they could start a project without having the full script. They had to really calm me down because I was like, “This is a bit insane what you’re asking me to do.”

Did they at least tell you what would happen to Aneesha over the course of the show?

I had absolutely no idea. I just had some hints that this character — and they were calling it somehow the heart of the series — is the one that is doing some crazy stuff. Only in America do they keep you in the dark for, like, ever. I had to beg.

Two weeks before the shoot I was like, “Guys, can I at least know what the story is going to be?” I started to steal scripts from the hair and makeup department because they had them and I didn’t. They told me the scripts were going to change, and I would say, “It doesn’t matter, I just want to know where this character is going to go.”

“With people who are exiled, it’s like we are stuck in limbo,” said Farahani, who was born in Iran but eventually left for France. “So you have to create a continent of your own.”Credit…Sofia Gomez Fonzo for The New York Times

What was it like to work with different writers and directors, which is one of the big differences between TV and film?

I’ve learned to be loyal to my directors, so changing directors for me was like changing husbands. It was really as if you’re married to someone and then they tell you to go to bed with another man and you’re like, “I’m a bit uncomfortable doing that.”

You have almost 12 million followers on Instagram. How do you manage that part of your life?

To be honest, I have no idea. I joined Instagram very late, considering, and it took me some time to feel it because I do everything very much intuitively. I think truth and being truthful is the key.

My Instagram is a very tricky thing because I have many Persian followers and many international followers. With people who are exiled, it’s like we are stuck in limbo: I’m not from France, but I’m out of Iran for more than 13 years now. So you have to create a continent of your own, and you have rules of your own, and you become your own somehow. In my career I didn’t do only blockbusters or only independent cinema, I was always surfing between worlds and not sticking to one genre.

Except for full-on comedies, which you haven’t really done apart from the French movie “Christmas & Co.”

I am very funny! [Laughs.] As much as I have tragedy and drama in me, I also have a clown. I have done movies where I am in funny situations, but I would love to do something where I actually am funny, because I am. The first person who told me that was Ridley Scott, when I was doing “Body of Lies.” He said, “The top of your qualities that you can do as an actor is a comedy.” So yeah, I hope that it will happen one day.

News Centerhttps://dropdowndeals.com
Breaking news from around the world, plus business, drop down deals, politics, style, travel, sport and entertainment.
Previous articleReview: At the Philharmonic, Contemporary Is King for a Week
Next article‘It’s Terror’: In Haiti, Gangs Gain Power as Security Vacuum Grows