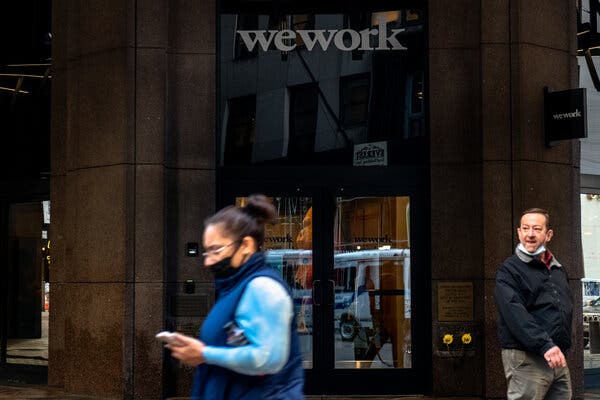 A two-year wait is nearly over.Credit…Hilary Swift for The New York Times

After two years, a failed I.P.O., a plunging valuation and a pandemic that reset many workers’ relationships with the office, the co-working company WeWork will begin a new life today as a publicly traded company.

WeWork argues it’s a better company now. It has renegotiated or exited some 500 leases this year, saving over $400 million, according to its C.E.O., Sandeep Mathrani. And its deal to go public via a merger with a SPAC, BowX, will provide $1.3 billion in new capital.

It has significantly dialed back the ambitions of Adam Neumann, a founder and former C.E.O., who pitched WeWork as the future of … well, a lot of things. He spooked many inside and outside the company with what they viewed as reckless management before his ouster.

But WeWork’s future remains murky. It is still burning cash as customers drop their membership fees in an era of remote working. SoftBank, the company’s biggest backer, faces an uphill climb just to break even on its multibillion-dollar investment. Once valued at $47 billion, WeWork is expected to trade at a market cap of around $8 billion. “I made a wrong decision,” Masa Son, SoftBank’s chief, said last year.

And Neumann hasn’t gone away. He and WeWork’s other founder, Miguel McKelvey, are hosting a party this morning to celebrate the company going public, DealBook has confirmed. Neumann still owns an 11 percent stake in WeWork, and can observe board meetings starting next year. That raises questions about whether WeWork can ever escape his shadow.

Donald Trump turns to a SPAC to back his media venture. The former president said he was teaming up with Digital World Acquisition Group to form a publicly traded media group to rival the “liberal media consortium.” Digital World is led by Patrick Orlando, a former Deutsche Bank executive.

Shares in Evergrande plunge after a failed stake sale. The embattled Chinese real estate giant’s stock fell more than 13 percent after it announced the end of its efforts to sell part of its property services business. The company is now days away from officially declaring default.

A twist in the Fed’s trading scandal. The central bank’s ethics office warned the Fed chair, Jay Powell, and regional bank presidents in March 2020 against trading in their personal accounts, though several later did, The Times’s Jeanna Smialek reports.

Amazon faces another unionization movement. Workers at a Staten Island warehouse that was scrutinized over its workplace conditions said they would formally begin a labor organization drive. It comes after a similar campaign in Alabama failed, though Amazon was accused of improperly influencing the vote.

Netflix workers log off in protest. Dozens of employees walked out of a company office in Los Angeles, while others ended work early, to voice their displeasure at Dave Chappelle’s recent comedy special, which they said promoted bigotry against transgender people.

PayPal has offered to buy Pinterest in a deal valued around $45 billion, according to people with knowledge of the discussions. If completed, the takeover would be the largest in the consumer internet industry over the past decade, topping Microsoft’s $26.2 billion purchase of LinkedIn in 2016 and Salesforce’s $27.7 billion acquisition of Slack last year.

The move is part of PayPal’s goal to drive further into e-commerce — and to put it on a different path than its rival Square. Through Pinterest’s app, people can save images to digital pinboards and buy goods directly through “buyable pins.”

“Sometimes we buy things that people don’t expect,” Dan Schulman, PayPal’s C.E.O., said last month, foreshadowing the Pinterest approach. In context, he was referring to the company’s $4 billion acquisition of Honey, a coupon payment platform, in 2019. Schulman has said that PayPal aims to become a comprehensive “super app,” like those found in Asia. Investors are wary: PayPal’s shares fell 6 percent after news of the potential deal.

“We are perplexed by this potential transaction, and see little or no strategic rationale,” Adam Jeffrey, an analyst at Truist, said, worrying that it could create conflict with PayPal’s other marketplace customers. He noted the deal’s rationale in some ways harkened back to eBay’s acquisition of PayPal 20 years ago, which was unwound in 2015 so that PayPal could more easily sign agreements with rivals to eBay.

“DuPont attempted to dump its liabilities on Chemours, just as it dumped GenX and other forever chemicals into the Cape Fear River.”

The price of Bitcoin set a new high yesterday, nearly hitting $67,000. The cryptocurrency has doubled over the past three months, with enthusiasm fueled by the launch of the first U.S. Bitcoin-linked exchange-traded fund this week, exposing a broader range of investors to the crypto world.

The focus on crypto is not all celebratory. Today, a group of top U.S. financial regulators will meet to discuss stablecoins ahead of a forthcoming Treasury Department report on oversight of the fast-growing assets. These cryptocurrencies, whose values are ostensibly pegged to stable assets like the dollar, are integral to transactions in the burgeoning world of crypto financial services because the volatility of Bitcoin and others are impractical for that purpose. Regulators fear that stablecoins could become a systemic risk as crypto and traditional markets increasingly entwine. The Treasury Department declined to comment on today’s meeting.

Tethered to what? Last week, the C.F.T.C. ordered Tether, the issuer of the most popular dollar-backed stablecoin, to pay $41 million in fines for years of misleading statements about the assets backing its tokens. Yesterday, the activist short-seller Hindenburg Research offered a $1 million bounty for information about Tether’s reserves.

Nelson Peltz, the billionaire financier famous for shaking up companies he invests in, told CNBC yesterday that he speaks with Senator Joe Manchin weekly. “Joe is the most important guy in D.C. — maybe the most important guy in America today,” Peltz said of the West Virginia Democrat, a key swing voter in a narrowly divided Congress. “I call him every week and say: ‘Joe, you’re doing great. Stay tough.’”

Manchin’s powwows with Peltz raise questions for the senator, who has faced criticism from his party after The Times reported that he was pushing to block a key program in President Biden’s plan to combat climate change. The $150 billion clean electricity program would have rewarded utilities that shut down coal and natural gas plants in favor of greener energy, and penalized those that did not.

The problem: Peltz’s investment firm, Trian Partners, is a big shareholder in General Electric, one of the largest managers of gas-fueled electricity plants. Peltz’s son-in-law Ed Garden, who is also a Trian partner, is a G.E. board member. Biden’s clean electricity program would have had a significant effect on G.E., which reported more than $17 billion in revenue from its power business last year, about three-quarters of which came from gas-power generation. (G.E. also has a growing renewable energy business, and some of Biden’s other climate proposals could benefit those operations.)

Will Manchin’s supporters be bothered by him getting advice from a Wall Street billionaire? Regardless, the fact is that West Virginia is one of the nation’s largest coal and natural gas producing states. On top of that, Manchin, as The Times has reported, owns a stake in a coal brokerage business he founded that is now run by his son.

The $50 billion question about legacy admissions

Amherst College announced yesterday that it would end legacy admissions, which give the children of alumni preferred treatment in the application process. It joins other selective schools, like M.I.T., Johns Hopkins and Caltech, in scrapping the practice.

Elite schools say legacy admissions encourage alumni to donate more, but a study that tracked giving at 100 schools from 1998 to 2008 found no evidence of that. Still, schools with legacy admissions tend to attract higher alumni donations in general than others, possibly because they overselect from wealthy families.

Amherst’s decision raises issues around the admissions process. And if the trend catches on, there could be a huge amount of money at stake. According to one survey, U.S. higher-education institutions pulled in nearly $50 billion in donations in the year to June 2020. Here are some of our questions about that money if others end legacy admissions:

What do you think will happen? Let us know at dealbook@nytimes.com. Include your name and location, and we may feature your response in a future newsletter.

To unlock the full breadth of coverage of The New York Times for you and your team, get an institutional digital subscription.

News Centerhttps://dropdowndeals.com
Breaking news from around the world, plus business, drop down deals, politics, style, travel, sport and entertainment.
Previous articleOnlyFans May Be a Refuge for Nude Fine Art
Next articleContrasting Plans, Contrasting Styles