A Call to Avert a U.S.-China Cold War 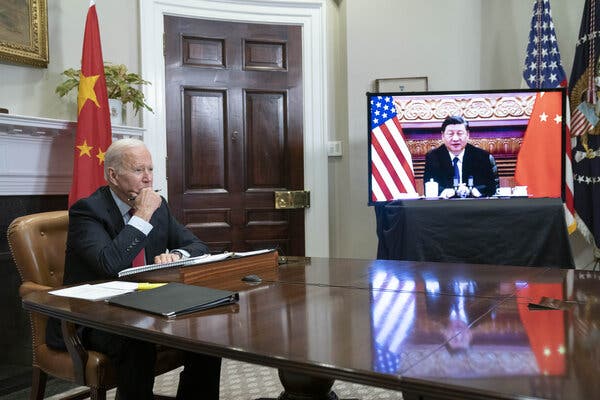 In a virtual summit, President Biden and President Xi Jinping showed willingness to manage their conflicts, but tensions remain.Credit…Pool photo by Sarah Silbiger/EPA, via Shutterstock

Exclusive: Hank Paulson urges D.C. and Beijing to tone down the rhetoric

Few financial leaders in the U.S. have as much expertise on China as Hank Paulson, the former Treasury secretary and Goldman Sachs C.E.O. Since Donald Trump’s election, Paulson has warned that U.S.-China relations are deteriorating. But in a speech he will deliver today, shared with DealBook, Paulson is sounding the alarm louder than ever.

“The world is heading for a very dangerous place” if Washington and Beijing can’t find ways to cooperate, Paulson plans to say at the Bloomberg New Economy Forum in Singapore, an event that was moved from China earlier this year. In his speech, Paulson outlines some of the biggest problems that a growing rift between the world’s two biggest economies could cause:

President Biden and President Xi Jinping of China met for more than three hours in a virtual summit last night, expressing a willingness to manage their differences but offering no specific breakthroughs (or even a joint post-meeting statement). “Let’s not kid ourselves that one leaders’ meeting can resolve the very real strategic and competitive tensions between our countries,” Paulson will say of the meeting.

The consequences of escalating tensions could be dire. “Great powers rarely desire to go to war. But history is replete with horrifying examples of how they stumbled into it,” Paulson will say. “It’s important we act now, not when the crisis comes, to prevent natural competition from turning into terrible conflict.”

Mixed news for President Biden’s economic agenda. While he signed the $1.2 trillion bipartisan infrastructure bill into law yesterday, the head of the Congressional Budget Office said that increased I.R.S. enforcement — a crucial source of funding for Biden’s proposed $1.8 trillion social spending bill — would bring in less than predicted.

JPMorgan Chase sues Tesla over Elon Musk’s tweets. The lawsuit is tied to Musk’s 2018 tweets about taking the carmaker private and relates to a warrant transaction between the two. JPMorgan is seeking at least $162 million; Tesla has disputed the bank’s accusations.

Earnings reports reflect upticks in the pandemic economy. This morning, Walmart and Home Depot beat expectations for profit and revenue in their latest quarters. And WeWork, in its first earnings as a public company, disclosed a rise in new customer leases, though it still lost $802 million in the third quarter.

We have questions about Roger Ferguson and Apollo

Only weeks after Apollo announced that Roger Ferguson was joining the firm, the former TIAA chief won’t be joining after all.

“Roger recently informed us that he has certain ongoing commitments with his prior employer and they are preventing him from working with us at this time,” a spokeswoman for Apollo told DealBook, confirming a report by Bloomberg. “We think very highly of Roger and wish him all the best.” Ferguson retired from TIAA in May, amid speculation that President Biden would appoint him to a role in the administration. (TIAA and Ferguson declined to comment.)

DealBook has a bunch of questions, which we are trying to answer:

“This is possibly the most important decision for Judaism in the 21st century.”

— ​​David Zvi Kalman of the Shalom Hartman Institute, on whether rabbis will declare plant-based “pork” kosher.

The architect of Exxon’s boardroom defeat moves on

Charlie Penner, the hedge fund executive who masterminded Engine No. 1’s activist shareholder campaign against Exxon Mobil and, improbably, won seats on the oil giant’s board, has resigned from the eco-minded investment firm.

Behind the departure were disagreements on some issues, DealBook has learned, though it isn’t clear what those were. Penner’s resignation appeared abrupt: He still worked for the firm yesterday morning, and his bio was only removed from the firm’s website about an hour after Reuters reported his resignation. “We appreciate the tremendously valuable work Charlie put in at Engine No. 1, especially on the Exxon campaign, and we wish him well in his future endeavors,” a representative for the firm said in a statement.

Penner’s Exxon victory put the upstart fund on the map. A veteran activist investor who pushed for changes at Whole Foods, McDonald’s and Apple while at Jana Partners, Penner brought the idea of pushing Exxon to go greener faster to Engine. Penner, as the firm’s head of active engagement, negotiated with Exxon for seats on the board while courting the oil giant’s biggest shareholders. The end result: Engine overcame Exxon’s opposition and got three of its four candidates onto the board. Wall Street watchers hailed it as a milestone for climate-driven shareholder activism.

A bump for banker bonuses

A year and a half into the pandemic, U.S. banking giants have profited from an economic recovery that has supercharged the markets for deals and trading. And as the season approaches when bankers negotiate bigger bonuses, it’s looking like they’ll get their way, according to Johnson Associates, a Wall Street compensation consultancy:

“There is a staffing shortage,” Alan Johnson, the managing director of Johnson Associates, said in an interview. “Every client we talk to is having difficulty getting recruits.”

It’s not us, it’s the supply chain

It costs more and takes longer to move goods around the world these days. Not coincidentally, executives have discussed — or, in many cases, complained about — supply chain issues on earnings calls far more frequently than in the past. A search of transcripts for mentions of “supply chain,” using the Sentieo data service, shows a clear trend:

The supply chain has become a popular culprit for earnings challenges. The social media network Snap, for instance, cited it as one of its “headwinds” in the coming quarter. The reasoning: Companies have most of their goods on back order, so there will be no need to advertise on Snap to drum up demand.

Some companies are being accused of blaming supply issues to mask other problems. Yesterday, the plant-based food company Oatly cut projected sales for the rest of the year. Executives told analysts that supply chain difficulties were slowing production of its oat-based milk. Oatly’s shares fell more than 20 percent after the news, and are now down nearly 50 percent from their May I.P.O. price.

Spruce Point Capital, which has been betting Oatly’s stock will fall, said the company’s real problem is not the supply chain, but demand. As evidence, Spruce points to Oatly’s reported inventory, which rose faster than sales in the quarter. (Oatly declined to comment.) Shares of Beyond Meat have also fallen sharply. “A lot of companies are facing supply chain issues,” said Ben Axler, Spruce’s founder and chief investment officer. “But what we are seeing is that expectations were too high in terms of consumer end demand for plant foods.”

News Centerhttps://dropdowndeals.com
Breaking news from around the world, plus business, drop down deals, politics, style, travel, sport and entertainment.
Previous articlePfizer Will Allow Its Covid Pill to Be Made and Sold Cheaply in Poor Countries
Next articleHungary’s Stop Soros law that criminalises helping asylum seekers ‘infringes EU law’