Evacuation orders were expanded on Tuesday for one of the largest cities in British Columbia, where officials have rescued hundreds of people stranded on highways by mudslides and flooding set off by torrential rains.

In Abbotsford, a city of about 162,000 people near the border between Canada and the United States, heavy rainfall set off mudslides and flooding in many areas of the city, the authorities there said. No injuries were reported, but residents were told late on Monday to leave their homes and take shelter in a convention center and at a high school in nearby Chilliwack.

Mayor Henry Braun of Abbotsford said at a news conference on Tuesday that evacuation orders had been extended to include up to 1,100 homes. He said the authorities in his city, with help from those in Chilliwack, were “doing everything that we can to minimize the impact of the flooding.”

“The flooding and mudslides have left a number of people displaced,” he said, adding that Highway 1, a major link between Abbotsford and Chilliwack, was closed.

More than 80 families seeking shelter had checked in to the Fraser Valley Trade and Exhibition Center, he added. “This is an uncertain and scary time for people who have been affected,” he said.

Rescues continued on Tuesday, but emergency officials said that high floodwaters had hampered them. Cars were overturned and roadways were impassable. Houses had been slammed by mudslides, and workers tried to plug culverts to stave off the flow, Mr. Braun said.

Abbotsford borders the town of Sumas, in Washington State, where highways were also inundated and rivers swelled to the brink of their banks. 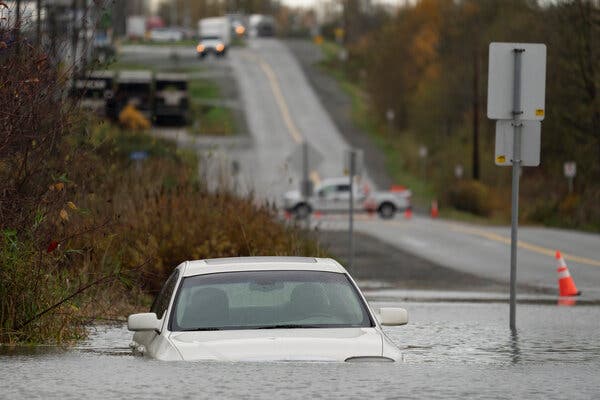 Residents of Abbotsford, British Columbia, were told to leave their homes and take shelter in a convention center and at a high school in a neighboring town.Credit…Jonathan Hayward/The Canadian Press, via Associated Press

Water from the Nooksack River in Washington State was crossing into Canada, flowing north and east and then pouring into the Sumas Prairie, Mr. Braun said. The water levels had risen “dramatically,” he said, cutting off communities with no end in sight.

“Once it’s full, it keeps flowing over the sides,” he said.

Hundreds of people were rescued from highways in British Columbia on Monday, officials said, after the torrential rain set off mudslides that trapped people in their cars and prompted evacuations.

Officials said that about 275 people who had been stuck since Sunday evening on Highway 7 near Agassiz, a small community east of Vancouver, had been taken to safety by helicopter. The Canadian Broadcasting Corporation reported that the rescue operation had ended by nightfall.

The efforts in Abbotsford resembled those in other parts of southern British Columbia. Residents of Merritt, a city of more than 7,000 people about 170 miles northeast of Vancouver, were told on Monday to leave their homes immediately after heavy rain caused the Coldwater River to spill its banks.

The weather system was caused by an atmospheric river, part of a convergence of storms so vast that it swept from California into Washington and southern British Columbia.

The weather system that dumped heavy rain and triggered mudslides in Washington State over the weekend was moving inland on Tuesday and was over central Canada, said Mike McFarland, a National Weather Service meteorologist based in Seattle.

“We have dry weather today and we really don’t have any significant weather systems coming in for the next week,” he said. “It will give a chance for all the rivers to recede, and give people a chance to recover from the floods.”