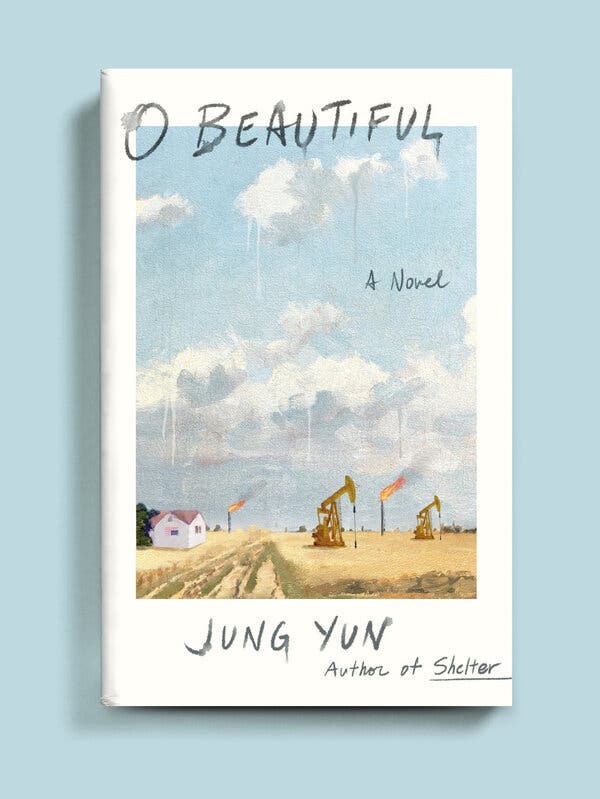 Welcome to Group Text, a monthly column for readers and book clubs about the novels, memoirs and short-story collections that make you want to talk, ask questions and dwell in another world for a little bit longer.

A journalist risks everything to chase a scoop, only to discover it’s not the story she was expecting. The one she uncovers is complicated, dangerous and personal.

O BEAUTIFUL (St. Martin’s, 320 pp., $27.99), Jung Yun’s mesmerizing and timely second novel, opens with one of the most uncomfortable scenes I’ve read in a long time. Elinor Hanson, a former model who is desperate to break into journalism, is on a plane bound for North Dakota, where she’s researching a story about how the oil boom has changed the landscape where she grew up. She’s jittery, nervous and wants to sleep, but her salesman seatmate is in the mood to schmooze. She rebuffs his cringe-inducing advances and he becomes miffed, then petulant. “I was only making conversation,” he says. “Don’t flatter yourself. You’re not my type.”

When Elinor falls asleep, he does not stay on his side of the armrest. Welcome to the intersection of fear and trying to be polite, where a little red light of panic will blink in your peripheral vision for the duration of this novel.

Yun’s Mack truck of a story transports us to Avery, N.D., “where thousands of itinerant oil workers from recession-ravaged parts of the country” have descended “upon a town of 4,000 that was unprepared to take them in.” Elinor’s hotel is booked to the hilt. The local watering hole has a fraternity-basement vibe, with an air of desperation hanging over its mostly male clientele. Every resource — food, decency, kindness, peace, even air — is in short supply. Yun creates such a sense of claustrophobia, it’s as if the sky has been cranked down a few notches.

Elinor is in the area on behalf of the Standard, a Very Important Magazine, completing an assignment that was originally intended for her former professor and love interest, Richard, who has been waylaid by hip surgery. At his recommendation, she has been dispatched to conduct previously scheduled interviews and tell the story he envisioned: a postcard from a place altered by greed, desperation and competing interests.

But there’s more to the oil boom than meets the eye, and Elinor is well positioned to make sense of it. She’s both insider and outsider, having grown up on a nearby Air Force base as the daughter of an American officer and a Korean woman (who eventually bolted, leaving Elinor and her sister with their father). Yun writes, “For as long as she can remember, people have been pushing her out of one circle or another, making her feel less American, less Korean, and now even less North Dakotan than she thinks she is.”

Elinor follows her instincts, paying close attention to the women she meets along the way. There’s the widow whose husband sold mineral rights to their land so he could pay his medical bills; now she can’t drink the tap water in her own home. There’s the club dancer living in a parking lot with her abusive boyfriend, the bartender who’s seen it all and Elinor’s sister, Maren, whose attempts to reconnect come with a slimy ulterior motive. Oddly, Elinor’s ties to strangers feel stronger than the slack connection she shares with her own flesh and blood.

The loudest voices in “O Beautiful” are the ones we never hear. They’re the perspectives and experiences of women who have disappeared: 27-year-old blond, blue-eyed Leanne Lowell, last seen jogging eastbound on Rural Route 1; and the 28 women, teenagers and girls (“a figure that’s both shockingly high and surely an undercount”) from the Mahua tribe who have been reported missing over a period of two years.

When Elinor turns her attention to their stories, her article — and her future as a woman of words — begins to take shape.

“Nomadland,” by Jessica Bruder. This is the book that inspired the movie starring Frances McDormand (worth watching, if you haven’t already). Bruder follows an ever-growing community of older people who move, as she puts it, “like blood cells through the veins of the country,” living out of Jeeps, campers and repurposed buses as they chase seasonal jobs.

“Amity and Prosperity,” by Eliza Griswold. It takes a writer who is both a journalist and a poet to muster the scientific knowledge and the sensitivity that Griswold brings to the subject of fracking in this evenhanded account. “Amity and Prosperity” is, as our critic wrote, “neither an outraged sermon delivered from a populist soapbox nor a pinched, professorial lecture.” Two communities are cracked open. What happens next?

In ‘Lessons From the Edge,’ How an Ambassador to Ukraine Became a Casualty of the Trump Administration