The Best Decisions Happen When the Manager Should be Sleeping

HOUSTON — World Series pressure never rests, and neither do the participating managers. A good night’s sleep? Good luck. That can wait.

When Houston’s Dusty Baker decided to move the slumping Alex Bregman down to seventh in the lineup for Game 5 against Atlanta on Sunday, it was not a thunderbolt idea that struck as he was filling out the lineup card in his office before the game.

“Usually, the thoughts come to me in the middle of the night, like most of them do,” Baker said. That’s exactly when the Bregman idea hatched, he said, overnight Saturday, “when I should have been sleeping.”

“You toss and turn and wake up and go to the bathroom, I get a lot of things the same way,” Snitker said on the field before Game 6 on Tuesday. “Or if you think of something, you want to sleep on it and see how you feel the next day. There’s been stuff that comes to me in the middle of the night. It’s just one of those instinctual things that hits you.”

These middle-of-the-night moments come two at a time, packaged during the week or 10 days’ worth of heavy pressure and light sleep. Beyond the two managers leading the current teams, there are a select few other men who know exactly what this whirlwind experience is like.

“You’re so busy,” said Bruce Bochy, who guided the San Francisco Giants to World Series titles in 2010, 2012 and 2014. “You have so many responsibilities. Your time is when you get away from the park and back to your room at night.”

But even then, a manager is not so alone. 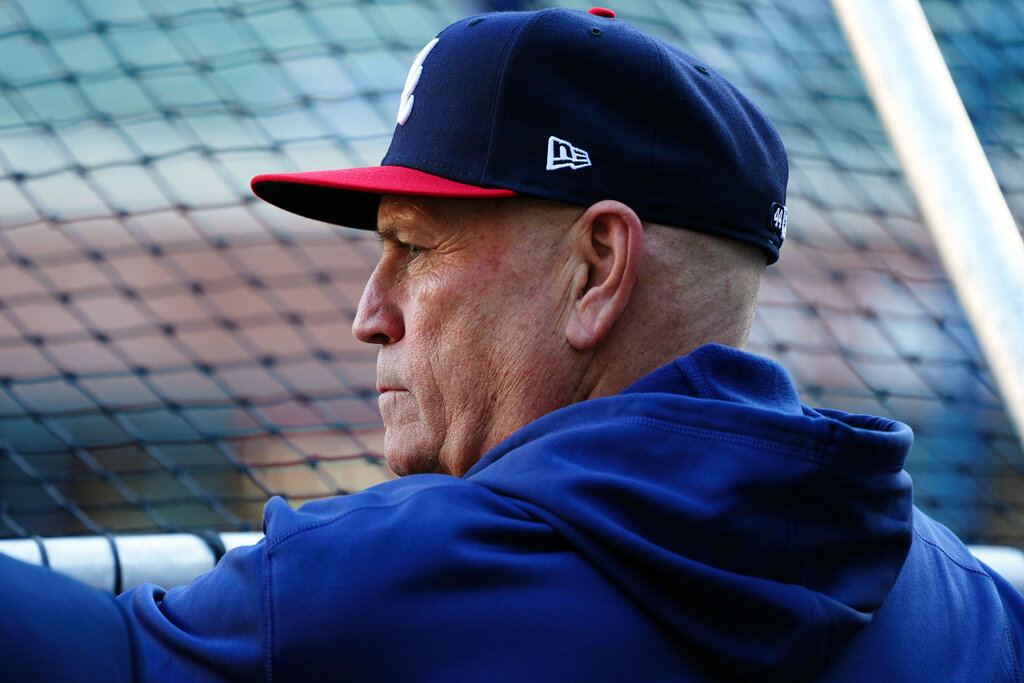 ‘There’s been stuff that comes to me in the middle of the night. It’s just one of those instinctual things that hits you.’

“When you lay your head down, that’s when your head starts to work,” Bochy said.

By day, World Series managers face responsibilities with their baseball operations departments, players and coaches. They are heavily scheduled for news media interviews and television obligations. There are fleeting moments for family members in town to help share these moments of a lifetime. There are ticket requests that can become consuming. The days seem too short for a manager to cover every detail while also attempting enjoy the culmination of a life’s work.

By night, alone with their thoughts and the latest game result churning in their stomachs, managers often find their brains working overtime to find peace amid a cacophony of sleep-delaying obstacles that can include distant, poignant family memories, television remote controls, Scotch and, even, peanut butter.

“These things, they come to me, and you can’t really control when they come,” Baker said of the thoughts that dance through his mind at night. “Like my dad used to tell me, some things you’ve got to sleep on. So I’ll try to sleep on it.”

Managers have slept on worse during a World Series. Cleveland’s Terry Francona revealed on the day of Game 7 against the Chicago Cubs in 2016 that he had a terrible nightmare the night before, dreaming that somebody “was breaking my ribs.”

“I woke up and my ribs hurt,” Francona said then. “I kind of got scared.”

As he was regaining consciousness, he said, he reached down to feel his rib cage and discovered no broken bones, but that the TV remote was “like, stuck in my rib cage. Evidently, I had slept on it for a couple of hours. I got up to go to the bathroom and, I mean, it hurt.

“It’s not easy being a manager. My bedroom looked like a national disaster last night.”

That wasn’t the end of it. Francona also woke up with peanut butter on his glasses, he said, because he had been dipping pretzels into a jar of peanut butter as he fell asleep in bed. 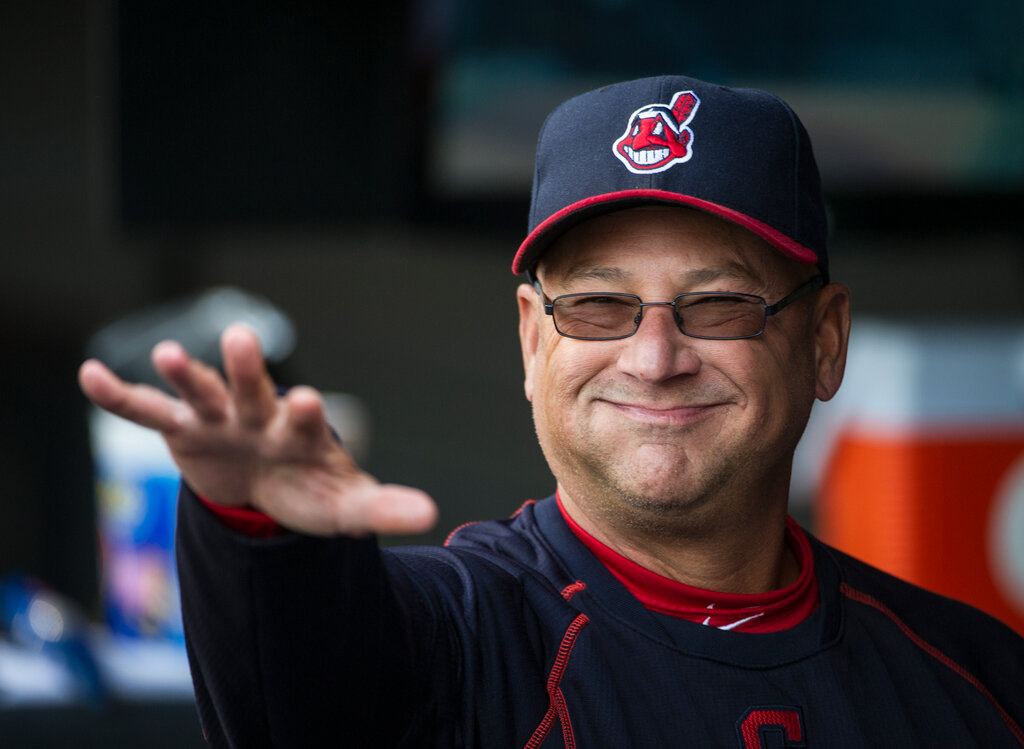 ‘It’s not easy being a manager. My bedroom looked like a national disaster last night.’

Terry Francona before Game 7 of the 2016 World Series.

“I go straight home and I hit the bed and everything’s laid out next to me,” Francona said. “And I fell asleep at some point while eating. I wake up sometimes in the middle of the night, and I’ll just reach over and grab something. Unfortunately, it’s true.”

Baker said he generally enjoys one glass of Scotch before bed — “I don’t need it, I just like it” — and falls asleep quickly. But he called himself a “mid-sleep insomniac,” as diagnosed by a friend of his who is a clinical psychologist.

“I wake up in the middle of the night,” Baker said. “I can go to sleep in 30 seconds, but then 3, 3:30 in the morning, my brain wakes me up with lineup changes or thoughts that I have to say to somebody or something. I always keep a pencil or pen by my bed and a piece of paper and write it down or else I’ll forget some of those great thoughts that I had in the middle of the night when I should be asleep.”

“Things are going through your head constantly,” Bochy said. “After the game you’ve got the media and everything, and by the time you get back to the hotel you’ve got all kinds of thoughts that can maybe help the club — a lineup change, going through your pitching, thoughts on what you want to convey to the club. Your mind is going nonstop, and it continues into the next day.”

He vividly remembers the night before Game 7 in Kansas City in 2014. “We got smoked in Game 6,” Bochy recalled — 10-0, in a game that evened the series at three games apiece.

“So you get back to the room and you’re thinking, ‘OK, how are we going to work through this? We’ve got Tim Hudson starting Game 7, how can we use Bumgarner?’” Bochy said. “All of this is going through your head.” 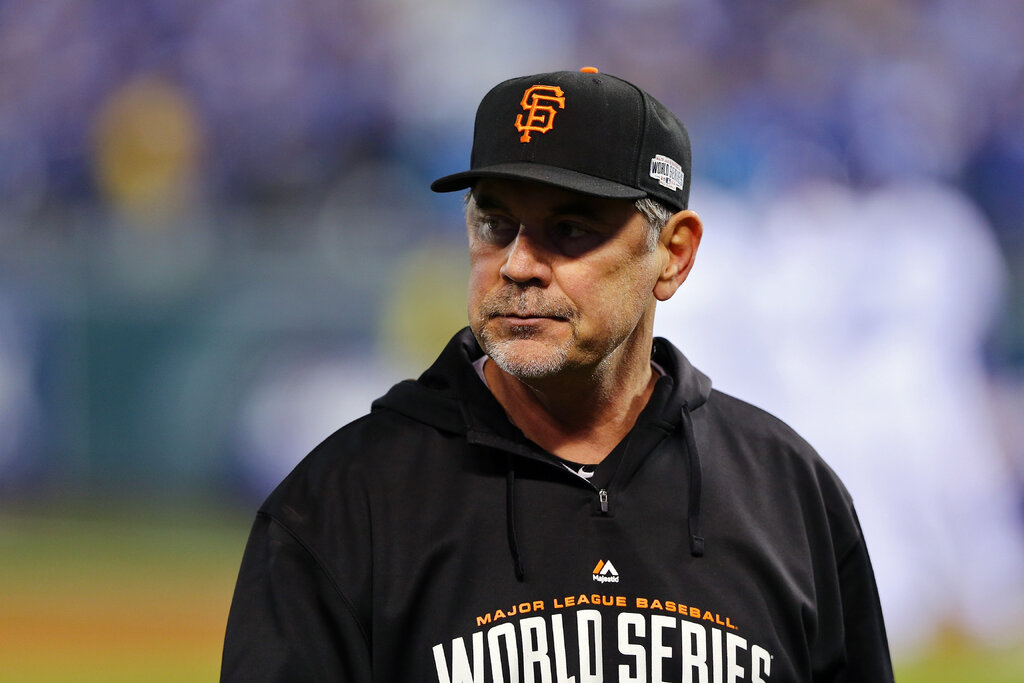 ‘You just lay there tossing and turning. Morning comes and you’ve got to get up.’

Of course, in one of the more memorable moments of any World Series, after Hudson went one and two-thirds innings the next day and Jeremy Affeldt bridged the next two and a third innings, the Kauffman Stadium bullpen gate swung open and Madison Bumgarner emerged. After throwing a shutout three days before, Bumgarner shut down the Royals over the last five innings as the Giants won their third title in five years.

Sorting through those thoughts in his hotel room on a Tuesday night in Kansas City did not cost Bochy as much sleep as his first time piloting the Giants in the World Series, when they took a lead of three games to one over Texas in 2010. That’s when his brother, Joe, starting kidding him: If you blow this one …

“Listen, I didn’t sleep at all that night,” Bochy said. “You just lay there tossing and turning. Morning comes and you’ve got to get up.

“You’re running on adrenaline. Adrenaline is a wonderful drug.”

Though he is managing a World Series for the first time, Snitker said he learned long ago that sleep is at a premium.

“That’s probably one of the hardest things you have to encounter here after experiencing it,” he acknowledged. “The games are so long, the days are so long. It’s hard to get to bed at a decent hour. You’re never hungry. And you don’t sleep good. I sleep like a baby: I wake up every two hours and cry.

“It’s hard to get into the routines and all that stuff. But you know what? I wouldn’t have it any other way. I’ll have a time to sleep over the next couple days.”

When Snitker and his wife, Ronnie, were talking earlier this year about his eventual retirement, she told him that it would be nice when he doesn’t wake up worrying about something every morning.

News Centerhttps://dropdowndeals.com
Breaking news from around the world, plus business, drop down deals, politics, style, travel, sport and entertainment.
Previous articleDemocrats Push for Agreement on Tax Deduction That Benefits the Rich
Next articleMilitary Grants Few Vaccine Exemptions as Deadlines Loom