CINCINNATI — Ricardo Pepi is young. He is unproven, unseasoned and unfinished. He could use a few more lines on his résumé and possibly a couple of more pounds on his lanky frame.

But because it has become equally evident in the early days of his career that Pepi possesses in abundant quantity the intangible, invaluable and often ephemeral magic needed to do the one thing valued above all else in soccer — because, in other words, he scores goals — none of the aforementioned stuff particularly matters.

Pepi, 18, may or may not become the striker of the future for the United States men’s soccer team. Many have tried to make the position — the No. 9, in soccer parlance — their own, and most have failed. But questions about Pepi’s long-term viability, his ceiling as a player, can wait. At the moment, there is a World Cup to qualify for.

And there is no question that Pepi is the American striker of right now. 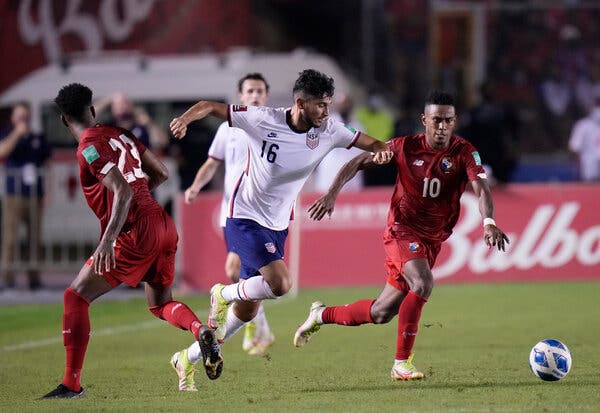 Ricardo Pepi in action against Panama last month. His four appearances with the national team have all come in World Cup qualifiers this fall.Credit…Arnulfo Franco/Associated Press

Ready or not, Pepi is being asked to carry a heavy responsibility on his teenage shoulders. After making his debut with the United States senior national team just two months ago, he was the only pure striker that Gregg Berhalter, the team’s coach, summoned for the team’s two World Cup qualifiers this month. The first of these is a marquee match on Friday night against Mexico in Cincinnati.

The show of faith, if risky, made sense: Pepi, who plays professionally for F.C. Dallas in Major League Soccer, has collected three goals and two assists in his first four appearances with the United States. He has also been one of the most consistent bright spots in the team’s somewhat shaky start to the qualifying tournament.

Pepi is the youngest player on a notably young team. (“Lose Yourself” by Eminem was the top song in the country when he was born in January 2003, and Tom Brady had only one Super Bowl ring back then.) The youth of the American squad has been at once a point of pride (when things go well) and an excuse (when things don’t go as well). But the team’s disastrous failure to qualify for the 2018 World Cup has helped coaches justify turning over a new leaf — track records be damned.

Pepi embodies that desire to start fresh more than anyone. He is all potential, a blank slate personified.

Yet his emergence could not be more timely. In recent years, the United States’ program has seen promising players sprout up all over the field. (American attacking midfielders, for instance, seem to be multiplying like jack rabbits). But the center forward position has long been something of a barren patch.

Brian McBride, who played from 1993 to 2006, remains the gold standard for American strikers, according to Herculez Gomez, a former national team striker. Jozy Altidore came closest to filling McBride’s shoes, Gomez said. Countless others have been hyped, but few have followed through.

“We could start spouting off a lot names,” Gomez, now an analyst for ESPN, said about the revolving door of strikers. “A lot of players have been put in the role, but not a lot of guys have taken the reins.”

Gomez said Pepi was raw, but undoubtedly promising, showing a sharp trajectory of improvement in the last year alone.

“I think his mentality is the strongest trait he has,” Gomez said. “He’s just so hungry. He’s got this arrogance about him. Borderline cocky. A swagger to him.”

That may be the case in the penalty area, but in most other circumstances Pepi is known as an introvert. In conversations with the news media, for example, he has a tendency to meander cautiously through the early beats of a response before settling on phrasing he has used before. (The problem with playing well, for some athletes, is that people want to speak with you.)

Pepi scored two goals in his first game for the U.S. and then added two more in a win over Jamaica in his native Texas.Credit…Chuck Burton/USA Today Sports, via Reuters

This type of shyness might be concerning for a coach, were it not so easily, and so ferociously, shed on the field.

“In the dressing room he was always kind of in the corner by himself,” said Francisco Molina, the former scouting director for F.C. Dallas, who met Pepi when he was playing in the team’s youth system. “On the field, he was a loud, screaming, rebellious kid.”

The first thing Molina noticed about Pepi was his spindly frame. (“Like a baby deer, he said.”) The second was his steady stream of goals: He could score them with his right foot or his left, with his head, with his knees and shoulders and shins. He can find almost any way to nudge the ball into the net.

These skills have drawn interest from the top clubs in Europe. Among those tracking Pepi’s development, there seems to be agreement that his next step should be a careful, conscientious one — a spot on a good team in a medium-profile league, perhaps, or one on a medium-profile team in a top league.

“You have to go somewhere where you play right away,” his U.S. teammate Chris Richards, who made a similar move to Europe from F.C. Dallas at age 18, said in an interview with the website Transfermarkt last week. “Sometimes you get caught up in the big names, but it might not be the perfect situation.”

There appears to be consensus, too, on the one area where he could improve the most: playing with his back to the goal. In those situations, Pepi prefers laying the ball off quickly to a teammate to get himself moving again. He does not yet look as comfortable holding the ball and withstanding a physical challenge from a defender, the kind of pause that top strikers must master in order to give their teammates time to build an attack around them.

For Pepi, the key may be as simple as putting on some muscle.

“At the higher levels, the center backs, most of them are athletic beasts,” said Quill, Pepi’s former youth coach. “He’s got a slim frame. He’s going to have to do a lot of work in the gym.”

Molina concurred. “His body hasn’t caught up to his brain yet,” he said.

Already adept at finding spaces and converting scoring chance, Pepi will need to get stronger if he hopes to replicate his success in Major League Soccer in a European league.Credit…Tim Heitman/USA Today Sports, via Reuters

Pepi’s soccer brain and body will continue to develop, but his heart was already put to the test this past summer when he was forced to choose between representing the United States, where he was born, or Mexico, the home of his parents.

Pepi grew up in San Elizario, Texas, a working-class town just outside El Paso. He spoke Spanish at home, followed Club América of the Mexican league, rooted for Mexico’s national team and idolized its stars. Moving seamlessly between cultures was natural for him, the way it can be for countless children of immigrants around the world.

In the end, Pepi chose the United States because of the comfort he had developed with the federation, and because of the opportunities the team offered to help him to thrive.

“Follow your own path,” Pepi said when asked what advice he might give to another Mexican American player facing the same choice. “Make your decision with your heart.”

Michael Orozco, a fellow Mexican American who played 29 games for the U.S. national team, was happy with Pepi’s choice. But he warned that Pepi could expect criticism, even vitriol, from Mexican fans moving forward, perhaps as soon as Friday night.

In 2012, Orozco scored for the United States in a friendly at Azteca Stadium in Mexico City, helping to lead the Americans to their first-ever win on Mexican soil. Orozco, who was playing in the Mexican league at the time and now plays for the U.S.L.’s Orange County S.C., said he was criticized by his club teammates for scoring and, worse, for celebrating. Orozco said he had no regrets, and he hoped Pepi wouldn’t have any either.

“He’s starting to prove himself,” he said. “Now, he has to live up to the potential.”

News Centerhttps://dropdowndeals.com
Breaking news from around the world, plus business, drop down deals, politics, style, travel, sport and entertainment.
Previous articleJohnson & Johnson will break itself into two companies.
Next articleReady to Unlock Your Inner Stephen Curry? Play Against the Knicks.