Mississippi Asks: If Women Can Have It All, Is Roe Necessary? 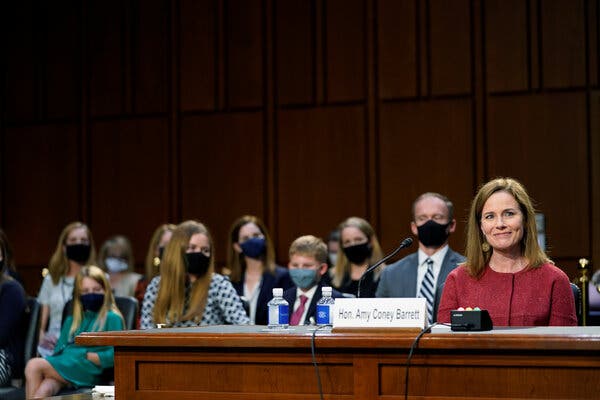 Justice Amy Coney Barrett during her confirmation hearing, with her husband and children behind her. Anti-abortion scholars say her career and family life, as a mother of seven, is an example of how the challenges of balancing work and family are less of an issue.Credit…Patrick Semansky, Reuters

The case that could lead to the end of Roe v. Wade includes a novel argument: that the right to an abortion is no longer necessary because it has become much easier for women to combine work and family.

In Roe, the Supreme Court said that an unwanted pregnancy could lead women to “a distressful life and future,” and in a 1992 case, Casey v. Planned Parenthood, that abortion rights were necessary for “women to participate equally in the economic and social life of the nation.”

On Wednesday, the court is hearing a case from Mississippi regarding a law banning most abortions after 15 weeks. In a brief to the court, lawyers for the state argued that those ideas about women’s lives had been obviated by “the march of progress.”

“In these last 50 years,” Mississippi’s attorney general, Lynn Fitch, said in a statement, “women have carved their own ways to achieving a better balance for success in their professional and personal lives.”

Mississippi makes other arguments that are likely to be more pivotal to the case, including that abortion law should be up to the states, and that because of scientific advances, fetuses can survive outside the womb earlier. The argument about economic opportunityis novel, though, because it focuses on the effects on women.

“The argument is: You can have it all,” said Mary Ziegler, a professor at the Florida State University College of Law. “They’re saying there’s no need because people like Amy Coney Barrett exist. Women can have big families and successful professional lives and there’s no need to choose.” (Justice Barrett, who joined the court under President Trump last year, has seven children.)

The argument serves another legal purpose, she said: If the need for abortion rights is “decades out of date,” there is a justification for overturning precedent.

A large body of social science and policy research tells a more complex story. While women receive more education than men, are increasingly likely to be primary breadwinners and have made significant gains in public and professional life, becoming a mother still has a significant economic impact. So does being denied an abortion. The people most affected by abortion restrictions are poor women — who also have the hardest time combining paid work and child rearing.

In its argument, Mississippi’s lawyers wrote that “numerous laws enacted since Roe — addressing pregnancy discrimination, requiring leave time, assisting with child care and more — facilitate the ability of women to pursue both career success and a rich family life.”

These policies don’t exist or are weak, on a federal level or in Mississippi.

The United States stands out for its absence of national paid leave — it is one of six countries in the world, and the only rich country, without it. It provides 12 weeks of unpaid leave, yet nearly half of workers don’t qualify, and many more can’t afford to take unpaid leave. Some states have paid family leave, but Mississippi does not.

On child care assistance, the United States again stands out. While rich countries spend an average of $14,000 a year on child care subsidies for toddlers, most families in the United States receive several hundred dollars in the form of a tax credit. Child care is unaffordable for nearly half of American families, according to the Treasury Department, and 71 percent of Mississippi families. Democrats are currently considering a bill that would provide four weeks of paid leave, subsidized child care for most families and universal pre-K.

The Pregnancy Discrimination Act of 1978 said employers could not treat pregnant women differently, and a 2015 Supreme Court ruling required them to make accommodations for pregnant women in some circumstances. But federal protections are weak in many cases, and a large analysis this year, of complaints to the Equal Employment Opportunity Commission and survey data, found that pregnancy discrimination remains rampant.

Anti-abortion scholars made another point: There might be more public policies supporting mothers if there weren’t strong abortion rights. Without Roe, they said, there could be more of a recognition of the differences between women’s and men’s reproductive lives, and more policies to accommodate pregnancy and child rearing.

Another argument made by Mississippi and those supporting the state’s case is that there is no way to prove a causal link between abortion rights and women’s ability to play an equal role in society.

“It may be possible to claim anecdotally that a particular woman’s abortion seemed to preserve her opportunity to pursue a particular job or degree,” wrote 240 female scholars and members of anti-abortion groups in a brief to the Court. “But it is impossible to claim that abortion access is specially responsible for the progress that American women have made.”

The Jackson Women’s Health Organization, Mississippi’s only abortion clinic and the respondent in the case before the Supreme Court.Credit…Rory Doyle/Reuters

A group of 154 economists also wrote to the court, saying the idea that children no longer affect women’s trajectories is “premature and false.” Also, the group said, sophisticated economic methods have demonstrated causal effects of abortion access. Researchers were able to compare similar people who either could or couldn’t get an abortion based on a policy change, as Caitlin Knowles Myers, an economist at Middlebury and an author of the brief, has described.

Studies found, for example, that access to abortion for young women with unplanned pregnancies led to higher earnings, more education and a higher chance of being a professional or manager than seen in women denied access to abortion. The effects were greatest among Black women.

The Texas abortion law. After the court let Texas effectively outlaw most abortions in a 5-4 decision, the justices heard arguments that could allow it to reverse course. The case puts Justice Brett Kavanaugh in the spotlight as the most likely member to switch sides.

A direct challenge to Roe v. Wade. The court is poised to use a challenge to a Mississippi law that bars most abortions after 15 weeks to undermine and perhaps overturn Roe v. Wade, the 1973 decision that established a constitutional right to abortion.

A major decision on guns. The justices will consider the constitutionality of a longstanding New York law that imposes strict limits on carrying guns in public. The court has not issued a major Second Amendment ruling in more than a decade.

A test for Chief Justice Roberts. The highly charged docket will test the leadership of Chief Justice John G. Roberts Jr., who lost his position at the court’s ideological center with the arrival last fall of Justice Amy Coney Barrett.

One of the best-known examples of the effect of abortion access is the Turnaway Study. It included women who went to 30 clinics in 21 states, and compared those who were just under or over the gestational cutoff for an abortion. In follow-up research, scientists looked at their credit reports for several years before and after the unwanted pregnancy. Being denied an abortion increased the chance that women were living in poverty, were unemployed, had overdue debt or had experienced bankruptcies or evictions.

“There is long-lasting economic impact of being denied an abortion,” said Diana Greene Foster, a demographer at the University of California, San Francisco, who led the study. “The thing I learned most from my study is that they’re making rational decisions taking into account their life circumstances. If somehow magically every pregnancy was supported and all lives would be rosy, people would be taking that into account. Instead, people are looking at their circumstances and thinking things are going to be really hard. And all the things they think are right, because we see those outcomes among the people who are denied abortions.”

Other recent research finds that having a child has continued to affect women’s economic outcomes. Around the world, gender gaps in pay and promotions widen when children are born. In the United States, the employment rate of women relative to men drops 20 to 25 percentage points when children are born, and their earnings drop 35 points, according to Henrik Kleven, a professor of economics and public affairs at Princeton.

A third argument in support of the idea that abortion access is unnecessary is that the expansion of women’s rights predated Roe, and women’s progress has continued even as abortion rates have fallen.

“Women’s motivation, determination and talent, plus state laws supporting that, is what has led to women’s advancement in society, not abortion,” said Teresa Stanton Collett, a professor at the University of St. Thomas School of Law and one of the authors of the anti-abortion brief.

People in favor of abortion rights say women are planning their educations and careers knowing that abortion access exists, should they need it. This is an argument known as reliance — that people make choices based on existing rules.

The Court used it in deciding Casey v. Planned Parenthood: “For two decades of economic and social developments, people have organized intimate relationships and made choices that define their views of themselves and their places in society, in reliance on the availability of abortion in the event that contraception should fail.”

Whatever decision the court makes about the Mississippi law, the case, along with other recent state restrictions on abortion, has cast doubt on whether women can still make plans based on that reliance, Professor Ziegler said.

“Mississippi is trying to redefine whether they can reasonably do that,” she said. “It’s a combination of saying women don’t need this anymore, and even if they do, they can’t reasonably expect it to be there.”

News Centerhttps://dropdowndeals.com
Breaking news from around the world, plus business, drop down deals, politics, style, travel, sport and entertainment.
Previous articleNigeria has detected the Omicron coronavirus variant in an October sample.
Next articleInflation in eurozone hits record high of 4.9%