‘Democracy Is Life’: The Grass-Roots Movement Taking On Sudan’s Generals

KHARTOUM, Sudan — In a bare, dusty field in a neighborhood north of the Sudanese capital, Khartoum, about a hundred people — gray-haired men in white robes and turbans, young women in jeans and T-shirts, mothers with their children in tow — gathered on a recent evening to discuss what they see as their nation’s most pressing need: democracy.

For more than six hours, over sweet milky tea and doughnuts, they debated how to dislodge the military from its grip on power, cemented on Oct. 25 when a military coup suddenly put an end to Sudan’s two-year-old transition to democratic rule.

Across this vast nation of more than 43 million in northeast Africa, hundreds of similar groups, known as resistance committees, are convening regularly to plan protests, draw up political manifestoes and discuss issues like economic policy and even trash pickup.

They are committed to nonviolence, though they have paid a high price. On a makeshift stage in the dusty field, in the Kafouri neighborhood, 16 photographs were on display — one woman and 15 men, “martyrs” from the neighborhood. They are among 79 people who have been killed in the protests since Oct. 25, according to a doctors’ group.

“People have been killed, injured and detained so that we stop organizing and protesting,” said Reem Sinada, 34, a veterinary medicine lecturer at the University of Khartoum, one of the local organizers. “But we won’t.” 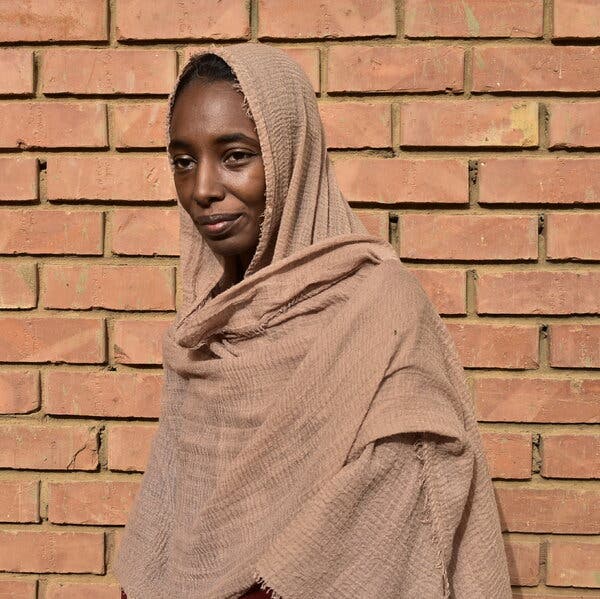 Reem Sinada said that for four days after the coup in October, she was so depressed that she could not get out of bed.

The neighborhood resistance committees are led mostly by young organizers, and they make a point of meeting in the open — in tea shops and under trees — rejecting the closed-room negotiations and top-down, male-centered leadership that have defined Sudanese politics for decades.

The movement does not have a single leader, relying instead on a decentralized structure in which individuals and communities organize their own events. They announce protest dates and demands on social media, in pamphlets and through graffiti and murals scrawled on walls. A media committee shares plans through a unified Twitter handle, but individual committees also manage their own social media accounts.

“The military wish they were dealing with a few political parties and elites, and not this large network of people all over the country,” said Muzan Alneel, a nonresident fellow at the Tahrir Institute for Middle East Policy in Washington.

Security forces in Khartoum have used tear gas — and sometimes bullets — to try to stop the demonstrations.

The standoff between the people and the generals has largely unfolded in the streets. The resistance committees have organized at least 16 major demonstrations since the military takeover, and plan to hold four more in February.

On a recent afternoon in Khartoum, protesters thronged bus stations, parks and squares before marching toward the country’s seat of power — the presidential palace. Retail businesses and banks had closed at noon. And demonstrators, waving theSudanese flag, blocked roads, beat drums and waved banners with anti-coup slogans.

Their chants echoed the graffiti on the walls: “Our revolution is peaceful,” and, “Even a tank cannot stop the breaking dawn.”

But security forces blocked roads and lobbed tear gas to stop the demonstrators from reaching the palace on Al Qasr Avenue. As some protesters coughed and retreated, a young man in blue swimming goggles screamed out to them, “Retreat is impossible!”

“The military wish they were dealing with a few political parties and elites, and not this large network of people all over the country,” said Muzan Alneel, a nonresident fellow at the Tahrir Institute for Middle East Policy in Washington.

More than 2,000 people have been injured during these protests, according to the Central Committee of Sudan Doctors. Of those who were killed, the majority were shot in the head, chest and neck, the group said. Security forces have also raided hospitals, intimidated health care workers and arrested patients, according to interviews with doctors and eyewitnesses.

The crackdown has not deterred protesters like Akram Elwathig, a 29-year-old hospital worker with an Afro and a toothy grin, who composes catchy chants and poetry to lead processions.

“Democracy is life,” Mr. Elwathig said. “Right now, we are like the dead. So we have to go to the streets so that we can get our lives back.”

In one recent poem that turned into a protest chant, he beseeched his mother not to worry that he might be killed for demonstrating: “I need your tears to turn into prayers,” he said. “I refuse military rule. I refuse the rule of someone ignorant.”

Sudan erupted in celebration three years ago after popular protests ousted the country’s longtime ruler, Omar Hassan al-Bashir. Then a civilian-military power-sharing deal ushered in hopes for a peaceful transition from dictatorship to democratic governance.

Hundreds of groups, known as resistance committees, are convening regularly to plan demonstrations, like this one on Jan. 24 in Khartoum.

But those yearnings were cut short at dawn on Oct. 25, when the military seized power and detained the civilian prime minister, Abdalla Hamdok — holding himat the home of the country’s military chief, General al-Burhan. A month later, Mr. Hamdok cut a deal with the military that was widely rejected by people on the streets, and he finally resigned in early January.

With billions of dollars in foreign aid suspended after the coup, rising fuel and food prices and increasing violence in the restive Darfur region, Mr. Hamdok’s departure scrapped hopes that one of Africa’s largest countries would quickly emerge from decades of repression, international isolation and American sanctions.

Some of the participants in the resistance committees said that their involvement was giving them a ray of hope in a bleak time. Ms. Sinada, the university lecturer, said that for four days after the coup, she was so depressed that she could not get out of bed. But the meetings have afforded her rare moments of connection and purpose.

“The resistance committees are writing a new chapter in Sudan’s political history,” she said.

“Democracy is life,” said Akram Elwathig, who composes slogans and poetry for the protests. “Right now, we are like the dead. So we have to go to the streets so that we can get our lives back.”

The committees have grown to become a loosely networked, grass-roots movement, transcending class, age and ethnicity and spreading in both rural and urban areas.

They first surfaced in 2013, said Ms. Alneel at the Tahrir Institute, with students and opposition activists mobilizing to protest rising gas prices. Then in 2018, after the popular uprising against Mr. al-Bashir, the Sudanese Professionals Association, a pro-democracy coalition of trade unions, helped raise their profile through a public call in order to spread the demonstrations countrywide.

Catering to the needs of their neighborhoods, they provided cleanups and garbage collection, tutored students and organized health checkups. They grew politically vocal: demanding justice for those killed during the anti-Bashir uprising, challenging the transitional civilian government on its new economic policies and holding mass rallies against the military days before they carried out the coup.

A protest on Jan. 6 in Khartoum. Security forces have raided hospitals, intimidated health care workers and arrested patients, according to interviews with doctors and eyewitnesses.

In the months since the Oct. 25 coup, they have rejected any compromise with the military establishment that has dominated Sudan for most of its independent history, and insisted on civilian rule. Resistance committees have also been blocking the road north to Egypt for several weeks over rising electricity prices.

Political parties or the security forces could co-opt them. And their geographic spread, also an asset, makes it hard for them to unite, Ms. Alneel said.

Women in the movement report discrimination, too.

Sara Mouawia, 23, from the Almulazmeen area in Omdurman city, said some men thought she was less knowledgeable about revolutionary politics or Sudan’s history, even though she grew up actively discussing such things.

Sara Mouawia said she was hit in the forehead by a tear-gas canister during a protest on Jan. 30.

In one protest in December, she said, several young men went so far as to beat her for being on the front lines as they faced security forces.

Ms. Mouawia was hit in the forehead by a tear-gas canister during the protests on Jan. 30, but she insisted that “nothing the men do will stop me from marching to the palace.”

For now, the resistance committees continue to draw more young people across Sudan.

Bassam Mohamed, 22, grew up in Saudi Arabia but moved back home to Sudan to attend university. He is from the Jabra area in southern Khartoum and said one person was killed from his neighborhood and dozens were injured during the anti-coup protests. Mr. Mohamed said he was determined to not only organize and fund-raise for the cause, but also to die in order to realize a Sudan where there was equitable distribution of power and wealth.

“Somewhere beyond the barricade, is there a world you long to see?” he asked in a roadside tea shop on a recent afternoon, quoting a line from “Les Misérables,” the musical about injustice and oppression in revolutionary France.

Taking a sip of black tea, he answered: “Yes, there is. And we are going to march there.”

A protest in January in Khartoum. Some participants in the resistance committees said that their involvement was giving them a ray of hope in a bleak time.
Facebook
Twitter
Pinterest
WhatsApp

News Centerhttps://dropdowndeals.com
Breaking news from around the world, plus business, drop down deals, politics, style, travel, sport and entertainment.
Previous articleBiden Will Press German Chancellor on Russia Sanctions and Pipeline
Next articleTwo years after his death, the Chinese doctor who warned of the virus is remembered.